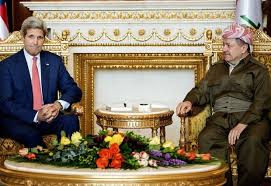 Alwaght- On July 13, the US Acting Assistant Secretary of Defense for International Security Affairs Elissa Slotkin and Interior Minister in the Iraq’s Kurdistan region inked in presence of the Kurdish President Masoud Barzani a cooperation deal under which Washington would offer aid packages worth $415 million to the Peshmerga forces as part of the policy to fight the terrorist group ISIS in Iraq.

This is not a novel deal as earlier the US Secretary of Defense Ashton Carter had referred, on May 4, 2016, to such an agreement as he elaborated on the US anti-ISIS strategy in the region.

This protocol is in fact a formerly signed protocol between Erbil and Washington for implementation of the US Senator Mac Thornberry’s controversial plan which was drafted in the U.S. House Committee on Armed Services on April 29, 20, aiming at allocating a direct aid package to the Kurdistan region without coordination with the central Iraqi government. To fight ISIS in Iraq, the US senator’s plan added new items to the 2016 American aid to Baghdad which was published as part of National Defense Authorization Act. For a long time described as US plan to partition Iraq in three smaller states, these items have actually displayed Washington’s effort to tip the scales of power in favor of Peshmerga and Sunni forces and against the interests of the popular anti-terror Public Mobilization Forces (PMF).

The plan authorized the Security Assistance Command in Iraq to offer $715 million in aids to the Iraqi forces which are fighting the terror group ISIS. But Senator Thornberry added an item to the terms of the plan, demanding that 25 percent of the money be delivered directly to the Sunni and Peshmerga forces. 75 percent of the aid was set to be kept intact until the Iraqi interior and defense ministers confirmed that the Iraqi government would hold a meeting for the national political reconciliation. Should the government fails to do so, 60 percent of the US aids would go to the Peshmerga and Sunni forces.

Although following the media propaganda, it was later maintained that the Committee on Armed Services reviewed the plan terms, the amendment was in fact a short explanation by Senator Thornberry who beside respecting the terms of the plan Said that the aim of the bid was not intervention in Iraq’s affairs, or violating the country’s sovereignty. Therefore, keeping its original terms, the proposal was adopted in 2016 as a bill in US Congress.

While Washington clearly moved to change the balance of power in favor of Sunni and Peshmerga forces, Washington Institute for Near East Policy has called the bill as nurturing anti-Hezbollah forces in the region, meaning actually trying to take advantage of the potentials of PMF. Other than allocating direct budget to the Peshmerga and Sunni forces and seriously pursuing establishment of native forces in Iraq’s provinces, Washington used the old strategy of training and equipping the regular Iraqi forces. So, the US in 2015 sent 1500 training forces and allocated $1.61 billion for training and equipment of 9 brigades of the Iraqi army and three brigades from Peshmerga forces in a bid to prepare them to take part in the upcoming Mosul recapture operation. This aid plan is said to be credible until 2017. $1.23 billion of the budget goes to training program for 9 brigades of the army which altogether are estimated to hold 45,000 troops. Moreover, $353.8 million from this budget would be spent on training and equipping 3 Peshmerga brigades which collectively contain 15,000 forces. This plan was sped up just 24 hours after Russia started its anti-terror air campaign in Syria in September 30, 2015.

On July 17, Bayan Sami Abdul Rahman, the representative of Kurdistan regional government in the US in an interview with the official news website of Kurdistan Democratic Party beside talking about signing the US-Kurdistan military cooperation deal and stressing its significance referred to the independence referendum of the Kurdish region.

“As a representative of Kurdistan regional government, I made it clear to the US officials that our goal is to become independent, and the Americans understand our demands,” said Bayan Sami Abdul Rahman.

“For two reasons the US is paying attention to Kurdistan region: first is the Peshmerga breakthroughs in anti-ISIS fight and second well reception of a large number of refugees of anti-ISIS battle by the Kurdish region’s people and government,” the Kurdish envoy continued.

At the same time, the website has posted another topic, presenting Masoud Barzani as the founder of federalism in Kurdistan and at the present time the one who is paving the way for the autonomous region to turn into an independent country.

The Kurdish pattern and increased efforts for autonomous Sunni regions

The Kurdistan Democratic Party following ISIS’ assault on Erbil up to now has tried to keep sleeping the efforts for gaining independence of the Kurdish region. However, after US shifted focus on the Peshmerga forces in Mosul front, the Kurdish leaders reactivated attempts for obtaining their independence from Baghdad. In fact, Kurdistan Democratic Party seeks exploiting the grounds for anti-ISIS battle to realize the ultimate goal of founding an independent Kurdistan. Actually, this Erbil move is because of the conditions that Syria’s Democratic Union Party is also using to firm up the position of Kurdish cantons structure in northern Syria and legitimize it through working with the US in the anti-ISIS battle.

No matter whether the growing Kurdistan Democratic Party’s efforts for independence would yield results or not, it must be noted that one of the direct effects of such effort is provoking the Sunnis of the country to seek autonomy from Baghdad. Due to lack of consensus over the autonomy between the Sunnis themselves, the issue of autonomy of Sunni region never went beyond simple remarks, but there are evidences showing that the Sunnis now, taking cue from the Kurds, are achieving consensus on establishing an autonomous region following cleaning up their regions from ISIS terrorists.

This is a matter that topped the Sunni rhetoric again in 2015. Osama al-Nujaifi, the former speaker of Iraq’s parliament said on February 22, 2015 that establishment of an all-Sunni region comprised of the provinces which are located on administrative borders was a very ordinary and legal issue, and it could organize Baghdad’s relations with those provinces and distribute the powers. At the same time, Khaled al-Mafraji, the spokesman for Iraq’s Supreme Cooperation Committee, said that the Sunni Arabs in Iraq with establishing a self-governed autonomous region could settle their problems with the central Iraqi government. Besides, Adnan al-Dulaimi, the head of Iraq Reconciliation Front in the country’s parliament, published a proposal for founding an autonomous Sunni region which included the five provinces of Nineveh, Al Anbar, Salahaddin, Diyala, and Baghdad. Additionally, the Sunni politicians described Al Anbar as the stepping stone for establishment of an autonomous Sunni region, and Rafi al-Issawi, the former finance minister, called on the Arab League as well as the international community to support the idea of an independent Sunni region in Iraq.

It was after these Sunni politicians’ stances that the US Vice-president Joe Biden, following the completion of process of cleansing Salahaddin and Tikrit of terrorists, once again seriously talked about federal system in Iraq. Biden on April 9, 2015 during his address in Washington National Defense University delivered explanations about the process to implement the plan on the ground. Following Biden, the Iraqi Prime Minister Haider al-Abadi as part of his political reforms on August 2, 2015 decided to transfer full powers of 8 federal ministries to the local governments. The base for this al-Abadi’s decision was an act adopted in 2008 in Iraq’s parliament— which was reviewed in 2013. The act, recognized as the Law of Governorates not Incorporated into a Region, transferred the power of control and supervision of all the government ministries and institutions excluding the army, the courts, and the universities to the provincial councils.

Anyway, the development of the process shows that as circle of anti-ISIS battle is getting complete, some type of efforts for slipping off rule of Baghdad as a center of Iraq are observable in all levels.

Iraqi Kurdistan, Masoud Barzani, US July 20, 2016
Car imports from France
Expansion of NATO and its missile defense system pose a common threat to Iran and Russia