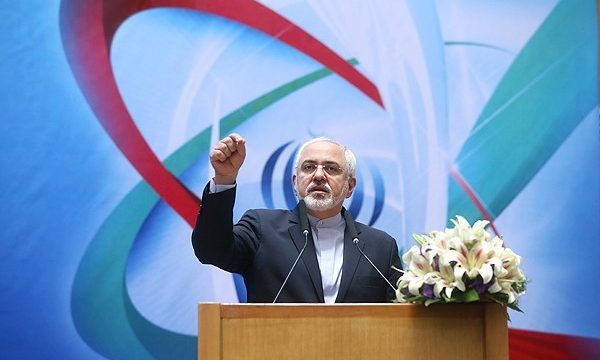 Iran’s Zarif: US cannot do a damn thing

TEHRAN (FNA)- Iranian Foreign Minister Mohammad Javad Zarif said the US should come to understand that the era of pressures has ended and Tehran is able to foil any plots, relying on its own national power.

“Despite spending billions (of dollars) in countries like Afghanistan, the Americans have not been able yet to understand this reality that the era of pressure and imposition of their will has ended; our people have imposed this reality on the Americans,” Zarif said, addressing a meeting with elite univerity and school students and teachers in Tehran on Tuesday.

He said the Iranian people’s massive turnout in presidential and parliamentary elections showed to the world that they don’t allow the US and the West to speak with them through the language of force, and that negotiation is the only way to resolve problems.

“The US which, by relying on its hegemonic power, demanded that Iran shouldn’t have even one centrifuge and imposed different types of sanctions against the country, was faced with 20,000 centrifuges (built by Iran while sanctioned). The US that once said Arak’s heavy water reactor should be destroyed, has not only accepted the heavy water reactor but also purchases heavy water from Iran today and contributes a role in efforts to redesign it,” Zarif said.

Noting that despite its situation and position in a volatile region, the Iranian nation is living in a secure atmosphere, he said, “It is because we have understood the basics of power and the most powerful power in the world is God.”

Zarif underscored that the era of imperial powers has gone, and said, “As the late Imam (Khomeini) said, the US cannot do a damn thing and we can thwart any plot against the country by relying on our people’s power.”