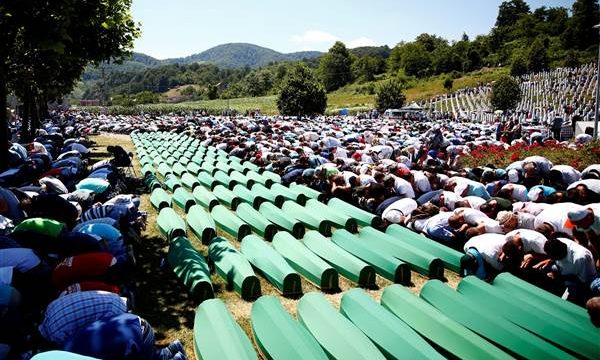 July 14, The Iran Project – Thousands gathered in the eastern Bosnia and Herzegovina’s town of Srebrenica on Monday (July 11) to mark the 21st anniversary of Europe’s worst postwar mass murder since World War II.

Twenty years ago, in the last days of the war between Serbs and Muslims, Serb soldiers ran over the eastern Bosnian town of Srebrenica even though it was formally declared a UN-protected area for civilians, brought the Muslim people out saying Srebrenica is no longer belong to them, then Muslim men and boys were separated from the women and girls who had their hands on their heads.

Serbs sent women and girls to Bosnia’s government-held territory, but men were left in the forest to return to the predominantly Muslim region. A few hours later, Serb soldiers went to the forests, shot a lot of unarmed men with death squads and captured many others! Then they shelled thousands captives away from the eyes of the world.

Over 8,000 Muslim Bosnian boys and men were killed just over four days in July 1995!

But some could go through a distance of one hundred and ten kilometers in the forests, reach Bosnian army and explain what happened in Srebrenica.

Some months later, Serb forces dug up the mass graves and scattered the bodies in a systematic effort to conceal the crime. Organs of some victims of Srebrenica massacre have been found from different mass graves. 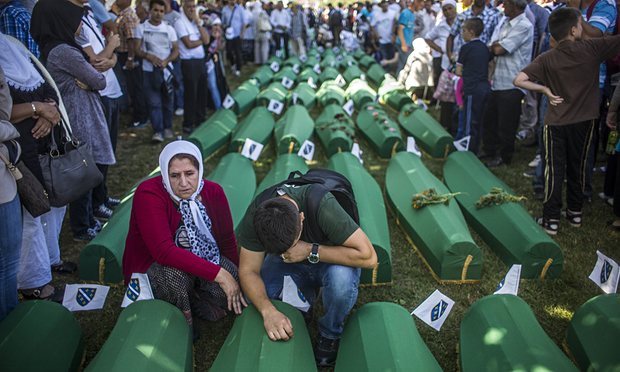 The mass funeral for 136 newly-identified victims of the 1995 Srebrenica massacre was attended by tens of thousands of mourners in July, 20 years after the atrocity. Photograph: Matej Divizna/Getty Images

Every year on the anniversary of this tragic event, more than two hundred bodies are discovered and buried in theSrebrenica-Potočari Memorial and Cemetery which was build right where the men and boys said good-bye to their wives and mothers for the last time.

Tens of thousands of people on Monday marked the 21st anniversary of Europe’s worst mass murder since the Holocaust and attended the funeral of 127 newly-found victims.

In remembrance of the hundred and ten kilometre distance Muslim Bosnians went through fearfully to reach the Bosnian army, every year, many people from all over the world walk through the same path where free food and facilities are provided.

The remains of 127 newly-found victims of the 1995 Srebrenica massacre have recently been buried more than 20 years after the carnage.

The act has been declared genocide by the war crimes tribunal in The Hague.  And former Bosnian Serb political leader Radovan Karadzic convicted of war crimes for his role in the Srebrenica killings sentenced to 40 years in prison and Bosnian General Ratko Mladic is still on trial in The Hague for directing genocide.