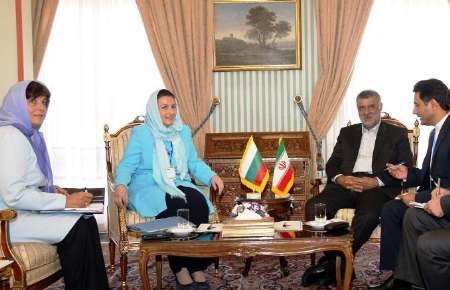 TEHRAN, Jul. 11 (MNA) – Iranian and Bulgarian ministers of agriculture, while meeting in Tehran Monday morning, discussed venues for expansion of agricultural cooperation between the two sides.

During the meeting which was held in Tehran’s Sa’dabad Palace in time with the arrival of Bulgaria’s PM in Iran, Mahmoud Hojjati pointed to capacities and potentials of Iran’s agriculture sector expressing hope that the trip will open a new chapter in development of scientific, research and economic cooperation in agricultural arenas.

Desislava Taneva, the Bulgarian Agriculture Minister, also emphasized her country’s political determination to bolster relations with the Islamic Republic of Iran asserting “proper grounds exist for agricultural collaborations between the two sides especially in areas of research, experience exchange as well as in forest and pasture sectors.

Given the Iranian agriculture minister’s emphasis on the need to speed up the creation of a legal framework to promote cooperation in agriculture, in particular exchanging agreements on animal and plant quarantine, the meeting agreed that necessary documents will soon be prepared to be inked by the two sides.

In order to ensure progress and implementation of the reached agreements during the meeting, Iranian and Bulgarian agriculture ministers nominated their own representatives.

Bulgaria is a net exporter of agricultural and food products.

#IranDeal, agriculture, Iran-Bulgaria ties July 11, 2016
US to deploy 560 more troops to Iraq: US defense secy.
US, UK speak for Bahrainis but act against them