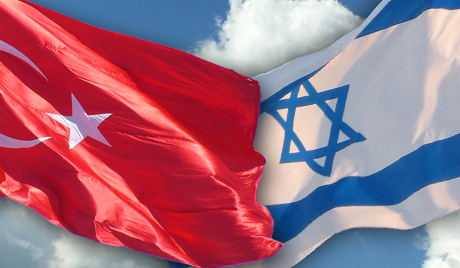 Relations between Turkey and Israel have continued with many ups and downs since 1950. At the beginning of the 1990s, a golden period of stability started in relations between the two sides, which continued until 2009 and 2010. During those two years, first a verbal brawl between Turkish President Recep Tayyip Erdogan, and then Israeli President, Shimon Peres, during the World Economic Forum in the Swiss city of Davos, followed by storming of a Turkish aid ship, called the Mavi Marmara, which was taking humanitarian aid to the Gaza Strip, by Israel commandos, drew a deep wedge between the two sides. As a result, good relations, which existed between Tel Aviv and Ankara for about two decades and which caused Turkey and Israel to be considered as strategic allies, were practically cut. It must be noted that part of this period – that is, from 2002 onward – is related to the Islamist conservative government of the Justice and Development Party (known as AKP by its Turkish name). What happened in 2009 and 2010, caused the government of the Justice and Development Party in Turkey to be known as an anti-Israeli government both inside the country and within the Islamic world, and this issue not only bolstered the social base of the party inside the country, but also caused positive inclination of the regional people toward this party. Despite this issue, some forms of collaboration, including military and economic cooperation, were never cut between Turkey and Israel.

The Justice and Development Party has already made the most of tensions between Turkey and Israel as a trump card both inside and outside the country, and  under present circumstances, when Turkey has not good relations with other neighbors, normalization of relations with Israel may reduce pressure on the government from the elite. Now that the two sides are on track to restoration of full diplomatic relations, this trend will not only help the Turkish government meet its political goals, but will help it achieve certain economic as well as security and military goals as well. Following the tension in Turkey’s relations with Russia, which has raised the possibility of total cutoff or reduction of the natural gas that Russia sends to Turkey, politicians in Ankara have been riveting their eyes on Israel’s plan to produce gas from an offshore field close to the Greek part of Cyprus. In this way, Turkey not only will be able to replace the Mediterranean gas for part of the gas it imports from Russia and Iran, but Ankara will also diversify its energy supply sources in addition to becoming more active in economic interactions around Cyprus, where it is involved in age-old tension with the government of Greece. In the meantime, the issue of transferring the natural gas produced by Israel to European markets through the Turkish soil would be greatly beneficial to both sides from an economic viewpoint.

From security and military viewpoints, the crisis that persisted between Turkey and Israel in past years had prompted Israelis and their intelligence agency, Mossad, to go to great lengths in order to bolster Kurdish groups positioned in northern Iraq against Turkey. Now that relations between the two sides are getting back to normal, the government of Turkey can take advantage of Mossad’s cooperation in order to deal blows to military structures of the Kurdistan Workers’ Party (PKK) outside its soil. On the other hand, taking advantage of Israel’s advanced technology and military equipment can be very helpful to Ankara, which is currently founding itself caught between two warring zones in Syria and Iraq.

Although a large parts of conditions set by Turkey to normalize relations with Israel have been met – including an official apology from Israel, payment of remuneration to victims of the attack on the Mavi Marmara aid ship, as well as relative and controlled lifting of the siege on the Gaza Strip – Israel’s condition for the office of the Palestinian resistance movement, Hamas, to be shut down in Turkey was met with furious rejection of the government in Ankara. Therefore, presence of Hamas as a factor in addition to distrust and hatred of the main social body of the supporters of the Justice and Development Party toward Israel, will not allow relations between the two countries to get back to the golden period of their strategic alliance in the 1990s, even if it fails to prevent full normalization of relations between Ankara and Tel Aviv.

Of course, a change in Turkish government’s anti-Israeli spirit may reduce public support for the Turkey’s ruling party both inside the country and across the Islamic world. However, since Turkey has not cut its relations with the Palestinian government and Hamas, if relations between Ankara and Tel Aviv pick up, the role that Egypt previously played in relations between Palestinians and Israel as well as its control over people of Gaza through Rafah border crossing will possibly start to wane or become totally nonexistent. This is true because Turkey and Israel are planning to supply goods and nonmilitary commodities to people of Gaza. The goods are to be taken from Turkey to Israel’s Ashdod port before being delivered to people in the Gaza Strip after Israeli officials run necessary controls on them. Turkey will also take charge of the reconstruction of Gaza and will provide people there with means of communication and welfare such as hospital, airport, and port facilities. All these facts show that Turkey is trying to play a new role with regard to the issue of Palestine, which will increase its political weight both among Arab countries of the region and in the eyes of the Western world.

Of course, it must be noted that Israel has proven time and again that when it comes to realization of the rights of the Palestinian nation, it has never fulfilled its obligations and even under the present circumstances, it does not seem that the government of Israel would easily facilitate the flow of Turkey’s aid to people in Gaza. In addition, Israel will possibly cause disruption in the aid flow in the future under various excuses in order to put pressure on Hamas. If this happens, Turkey’s behavior would be the best criterion based on which the honesty of the Justice and Development Party over the issue of Palestine would be tested while also serving as a determining factor in helping the party maintain its Islamist and anti-Israeli social base.

In the meantime, another important issue is the addition of Turkey to the axis that already includes Saudi Arabia and Israel, which will cause Turkey’s viewpoints on regional disputes, especially with regard to the situation in Syria, to drift away from those of Iran, and this will further intensify the ongoing crisis in Syria. In reality, if the government of Turkey showed the same resilience with regard to issues of differences with Iran – including the situation in Iraq and Syria – which it has shown over differences with Israel (with regard to Gaza) or Saudi Arabia (over the Muslim Brotherhood group), it would have been able to take more decisive steps for the resolution of crises in Syria and Iraq, while avoiding the negative security consequences of regional conflicts within its borders.

This article was written by Elyas Vahedi for Iran Review on July 08,2016. Elyas Vahedi  is Expert on Turkey and Caucasus Affairs.