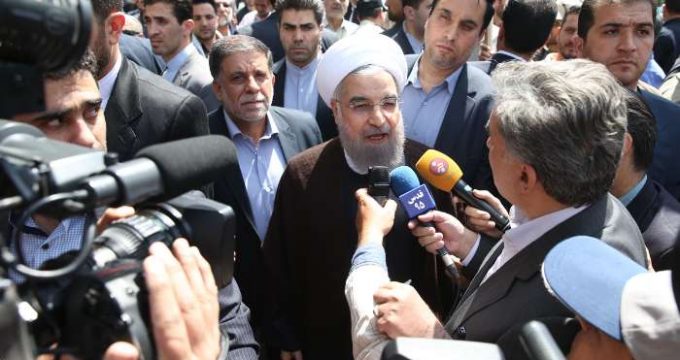 Tehran, July 1, IRNA – President Hassan Rouhani said on Friday that Palestinian nation will never remain alone and it will certainly achieve victory in the wake of resistance.

Talking to reporters on the sidelines of the International Quds Day rallies in the capital, he added that one of the aspirations of regional nations is regional security and one of the ways of establishing security in the region is that Muslim nations live in their own countries.

Noting that Palestinian nation have been displaced since 70 years ago, he added that occupiers never adhere the international regulations and human principles.

Describing Israel as a base for the arrogance and the US in the region, the president said that today all the countries should fight the base of global arrogance which does not favor security and stability in the region.

‘We have distanced from the ideal of liberating Palestine in the wake of discord in the Islamic world and emergence of Takfiri and terrorist groups in the region,’ he said, noting that there is no choice but unity and resistance and fighting terrorist and Takfiri groups.

Surely, the message of today’s ralliers nationwide is that Palestine is mot alone and they will stand alongside them, Rouhani said.