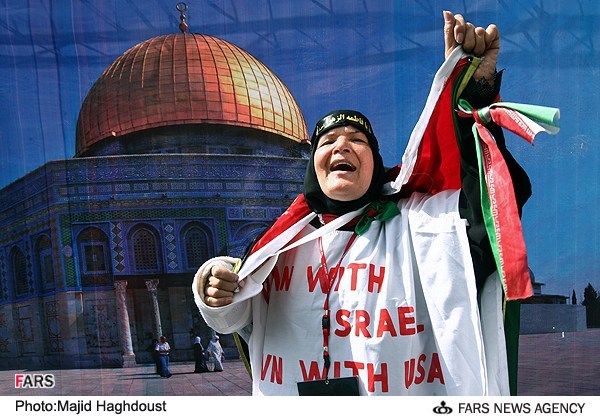 June 30, The Iran Project – Muslims countries, Iran in particular, are preparing to participate the International Quds Day rallies on first July to show their hatred towards atrocities of the Zionist regime against the Palestinian nation.

Initiated by the late Founder of the Islamic Republic Imam Khomeini in 1979, the International Quds Day is an annual event held on the last Friday of Ramazan, as a way to express solidarity with the Palestinians and underscore importance of the holy Quds to Muslims.

In spite of the pressure of the bully powers, each year new parts of the world, capitals and other cities are joining this largest, global annual demonstration to communicate their solidarity with the oppressed Palestinian nation.

So far several Islamic counties, Iranians above all, state officials and major bodies have issued messages and statements inviting the Muslims to participate in the events across the globe.

On Wednesday, Supreme Leader of the Islamic Revolution Ayatollah Seyyed Ali Khamenei called for a high turnout in the Quds Day rallies in support of Palestinian people.

President Hassan Rouhani also urged Iranian and world Muslims to stage a more unified presence at the International Quds Day rallies, during which demonstrators call for the liberation of Palestine and an end to the Israeli occupation.

The International Quds Day is considered as the day of supporting the oppressed people of Palestine and shouting for the liberation of the holy Quds from the clutches of the Zionist occupying regime which is fully sponsoring by western countries.

Since August 2015, the occupied Palestinian territories have been the scene of heightened tensions, when Israel imposed restrictions on the entry of Palestinian worshipers into the al-Aqsa Mosque compound in East al-Quds.

The al-Aqsa Mosque is the third holiest site for Muslims after Masjid al-Haram in Mecca and Masjid al-Nabawi in Medina. Palestinians are angry at increasing violence by Israeli settlers at the mosque compound and their attacks on Palestinian property, saying the Tel Aviv regime seeks to change the status quo of the sacred site.

This year’s Quds Day rallies will be held across the world on Friday, July 1.