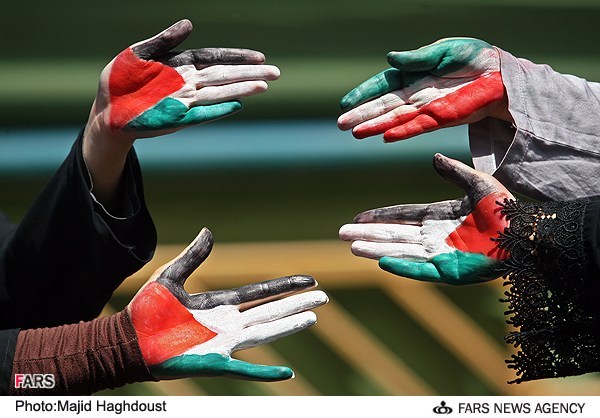 June 25, The Iran Project – Every year on the last Friday of the Muslim holy month of Ramadan, worldwide rallies are held to commemorate the Palestinian people’s resistance against Israel and their struggles to liberate their territories which have been occupied by Israel for decades.

Despite the pressure of the bully powers, each year new parts of the world, capitals and other cities are joining this largest, global annual demonstration.

Unfortunately the international community has remained silence toward the Zionist regime atrocities and more countries, including Saudi Arabia, are sponsoring Israel.

A senior commander of the Islamic Revolution Guards Corps (IRGC) believes that Quds Day is considered as symbol across the world.

Brigadier General Iraj Masjedi said that if Imam Khomeini, the late founder of the Islamic Republic, had not named the last Friday of the lunar fasting month of Ramadan as International Quds Day this valuable symbol would not survive.
Masjedi also invited the Iranian nation to fully attend the upcoming International Quds Day rallies and never forget Israel’s occupation of Palestine.

After the triumph of Islamic Revolution in Iran, the Iranian officials were trying to settle the Palestine issue, intensify the anti-Zionists combats, revive the Islamic values and Islamic religious identity, he said.

The importance of commemorating the International Quds Day is quite obvious. It indicated that people right across the world are rising up and acknowledging the ongoing massacre and abuses of the Zionists which has become part of its nature and the victimization of the ordinary innocent people and the suffering and the war crimes committed systematically.

Nowadays a huge increase in understanding of the oppression committed by the Zionists are shaping across the globe including Europe and United States.

This year’s Quds Day rallies will be held across the world on Friday, July 1.