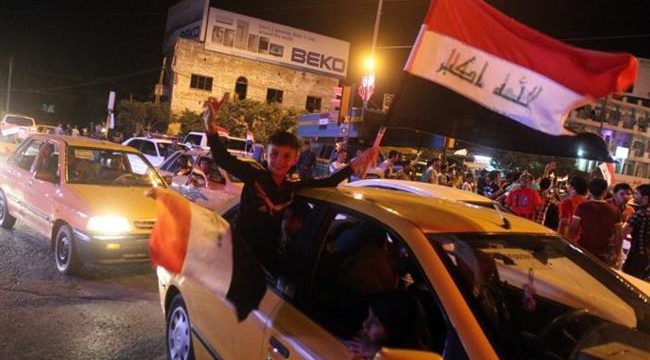 Alwaght- Fallujah is a name that for at least a decade in Iraq has been synonymous with clashes, violence and terrorism. Perhaps few people have not heard about name of this city in Al Anbar province or have not seen images associated with it in the Hollywood movies.

Whether in the time of the former Iraq’s dictator Saddam Hussein, in the time of occupation of Iraq by the foreign forces or today that a federal government is in place in Iraq, Fallujah always took a large amount of significance, and the government and the militant groups seek taking its control.

A few days ago, the official Iraqi news outlets reported, quoting statement by the country’s Prime Minister Haider al-Abadi, the news of liberation of Fallujah. A city that has been held by the takfiris of ISIS terrorist group since early 2014. It didn’t take the terrorists much effort to seize control of the city because part of the Fallujah population were in favor of going under the rule of militants of Abu Bakr al-Baghdadi, the leader of ISIS, and so facilitated their entry to the city. It didn’t take a long time to capture the city. The terrorists stormed the police headquarters of Fallujah and so the already hotbed of the terrorists fell to new terrorists in order for them to build their key command post there.

Fallujah: a place for flexing the muscles

From the time of occupation of Iraq up to end of mission of the US forces in Iraq, the insurgency was the most significant trouble and the major factor taking lives of the American troops. Fallujah was a flash point of the clashes, causing many troubles for anti-terror international coalition which is led by the US.

At that time, the Iraqi offshoot of Al-Qaeda, which later gave rise to ISIS, was so active and took Fallujah as a center of its activities.

The beliefs of part of Fallujah residents paved the way for the terrorists to get toehold there. They posed a direct threat to Baghdad as the city stands only 65 kilometers away from the capital.

The significance of Fallujah was so much that the American forces took risks of fighting the two vicious battles: Fallujah Battle One and Two, all to take a partial control of the city. The accounts of anti-terror forces in Fallujah were so famous that gave Hollywood the needed motive to create a number of movies on them.

Today Fallujah is a place where ISIS terror organization shows off militarily and ideologically. Fallujah makes a convenient mix with Mosul which gives the credit of having a government to the terror group. Fallujah today presents the same hotbed for ISIS that it presented for Al-Qaeda during the occupation of Iraq by the US forces.

The extremist capacities in Fallujah opened up the way of penetration of ISIS to the city in west of the capital.

The most prominent town standing on Fallujah-Baghdad way is Abu Ghraib, which represents a stronghold for the terrorists in Iraq. Should Fallujah remained in grasp of ISIS, even if the whole of Iraq was free, a threat was posing dangers to Baghdad and the Iraqi government itself.

Perhaps some critics, especially those opposing the Resistance Axis in the region, question the Iraqi government’s decision to prioritize Fallujah for recapture operation and also question use of popular voluntary forces dubbed Public Mobilization Forces ( PMF) in the Fallujah assault. The Americans and the Saudis since the launching of liberating offensive in Fallujah set in motion a question through their media: why should the Shiite forces take part in liberation of the city while Fallujah is located in (what they call) the Sunni triangle? They claimed that participation of PMF added to tensions and violence in the area. But there are some points about the PMF: it does not exclusively belong to Shiite community in Iraq.  The Iraqi government and popular forces could name the militant force Shiite Mobilization Forces if they sought seizing control of Sunni areas of Iraq.

It is notable that several thousand Sunni, Assyrian, and Yazidi volunteers are fighting ISIS under the flag of PMF. But regional media, mostly those belonging to Saudi Arabia,  underestimate their role and only magnify the Shiite fighters’ role in PMF all to fan tensions as crisis is under way in Iraq.  Another point on Fallujah recapture operation is that the PMF fighters were not the only sides of mission. In fact, the liberation of Fallujah took place while a wide range of tribal forces, army, federal police, and other voluntary forces were parties to the operation. In other words, Iraq’s government led the assault while having under its command an array of regular and voluntary forces.

It is worth noting that the US government officials expressed concerns about participation of Iranian advisors in the offensive, claiming that their presence was a cause for intensified sectarian clashes in Iraq.

Here, a question comes to mind: is presence of Iranian military advisors who went to Iraq at the official behest of Baghdad government so bad that the government should not take action to liberate Fallujah?

The last point is the significance of liberation of Fallujah as a strategic location. Perhaps some argue that Mosul is much more significant than Fallujah and so central Baghdad government should have moved to liberate Mosul first. But there are responses to all these blames. First of all, capture of Fallujah had threatened western areas of Baghdad as the heart of Iraq’s central government. A system that is engaged in a creeping fight with terrorism should first assure security of the center to guarantee that the ruling system is alive and well.

The second point concerns the level of extremism in Fallujah which paves the way for the terrorist group’s advances.

Earlier, the British daily The Times published some images depicting Abu Bakr al-Baghdadi coming to a mosque in Fallujah, which in Iraq’s culture is known as the city of mosques, to award the winners of a Quran reciting competition. No matter the images were fake or original, it must be taken into consideration that publishing news of presence of the self-proclaimed caliph in Fallujah is much more dangerously influential than publishing a news about him preaching in a Mosul mosque. The new actually carried a message to Baghdad: the leader of ISIS came a few kilometers close to you, and he could come even closer.

The message becomes important as we know that the ISIS-held Mosul is over 400 kilometers away from Baghdad while Fallujah is a western neighbor to the Iraqi capital and so poses more threats to Baghdad’s instable security, because it holds the grounds for radicalism and any time it could deal a blow to the central government. It is for this justification that Fallujah liberation is not of less significance than Mosul liberation.