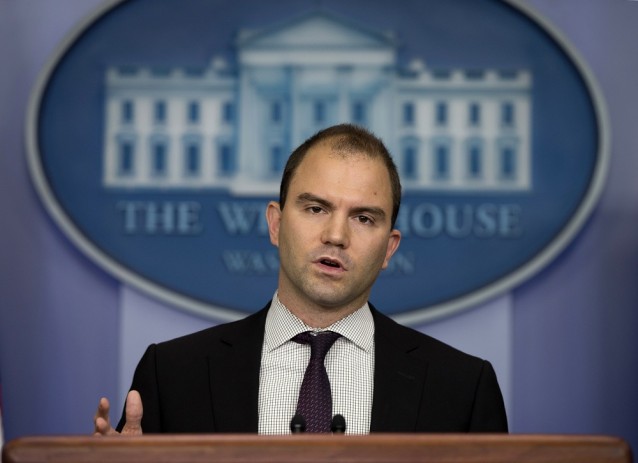 White House: Even Donald Trump won’t want to tear up the Iran deal

Despite Donald Trump’s repeated claims that he will “dismantle” the Iran nuclear deal if he becomes president, a top White House aide expressed confidence on Thursday that the next commander-in-chief, including the presumptive Republican nominee, would preserve the deal in order to prevent a potential military conflict in the Middle East.

“The way in which the Iran deal is structured creates enormous disincentives for an incoming president to tear it up,” Ben Rhodes, the deputy national security adviser, told a crowd at the Atlantic Council in response to a question by Foreign Policy. “To decide that one of the very first things I’m going to do is precipitate a crisis in the Middle East that leads to potential nuclear proliferation or another war — it just doesn’t seem like a very wise thing to do.”

The remarks come at a perilous moment for the nuclear deal struck by world powers last year that exchanges strict curbs on Iran’s nuclear program for the lifting of punishing economic sanctions.

Trump at various times has vowed to either tear up the deal or enforce it “like you’ve never seen a contract enforced before.” Meanwhile, Senate Republicans, led by Senator Kelly Ayotte of New Hampshire, are seekinglegislation that would slap new sanctions on Iran in response to its recent ballistic missile tests, moves that Tehran may interpret as a violation of the deal.

In Iran, Supreme Leader Ayatollah Ali Khamenei promised on Tuesday to “set fire” to the nuclear deal if unnamed U.S. presidential candidates follow through on their promises to renege on the agreement.

“The Islamic Republic won’t be the first to violate the nuclear deal. Staying faithful to a promise is a Koranic order,” Ayatollah Khamenei said in a statement. “But if the threat from the American presidential candidates to tear up the deal becomes operational then the Islamic Republic will set fire to the deal.”

Ayatollah Khamenei and other Iranian politicians have also complained that Tehran has not significantly benefited from the deal due to the restrictions that remain on financial transactions, which have slowed Iran’s reintegration with world markets. They also note that many international banks remain reluctant to do business with the country.

In his remarks on Thursday, Rhodes said the tradeoffs for pulling out of the nuclear agreement would be too high even for Trump, the freewheeling real estate tycoon who famously changes his positions from hour to hour.

“You would essentially come into office with all of the major nuclear commitments having been completed, with the stockpile out of the country, with the Arak reactor reconfigured, with no enrichment at Fordow, with all the centrifuges under IAEA monitoring and you would essentially decide that you would want to get rid of all those limitations on the Iranian nuclear program,” he said.

He also noted that tearing up the deal would alienate the countries the U.S. collaborated with to secure the deal, including the Europeans, Chinese and Russians — a headache he said a new president would likely seek to avoid.

“A basic principle is you don’t come into office and create a massive new problem for yourself,” he said.