A Look at Iranian Newspaper Front Pages on June 15

Leader of the Islamic Revolution Ayatollah Seyyed Ali Khamenei met senior Iranian officials in Tehran on Tuesday night. During the meeting, the Leader emphasized that if the other parties to the JCPOA, the nuclear deal, tear it up, Iran would set it on fire. The sentence was repeatedly mentioned by almost all Iranian newspapers on Wednesday. To avoid repetition,IFP has avoided citing all of them, and focused on other remarks quoted by newspapers from the Leader’s comments.

A meeting between Iran’s Foreign Minister Mohammad Javad Zarif and US Secretary of State John Kerry in Oslo was also a top story in many papers.

Saudi Arabia’s sponsorship of US election campaigns, as well as the huge increase of Iran’s oil output and exports were also widely covered.

3- We Should Further Encourage Companies to Do Business with Iran: Mogherini 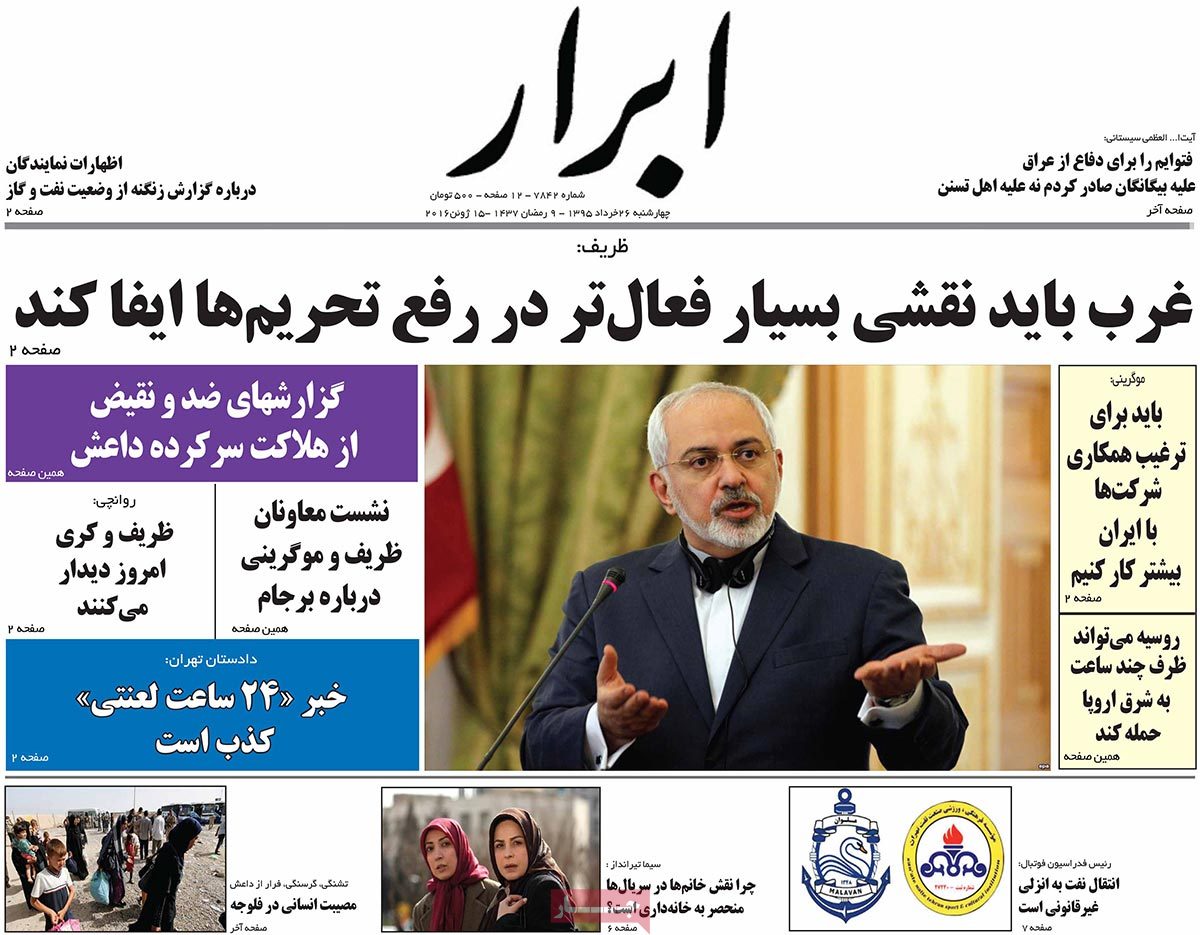 1- Think-Tanks Are Formed to Taint Gov’t

2- They Have Created an Unfair Atmosphere against Gov’t: Minister

1- Government Spokesman: Opponents of Gov’t Hold Regular Meetings on Saturdays [to discuss what they are going to focus on during the week]

2- Both Opponents and Proponents of JCPOA Exaggerate: Leader

3- Impossible to Deceive People Anymore by Distorting the Facts: Rafsanjani

5- Ahmadinejad Is the Product of Limited Political Space 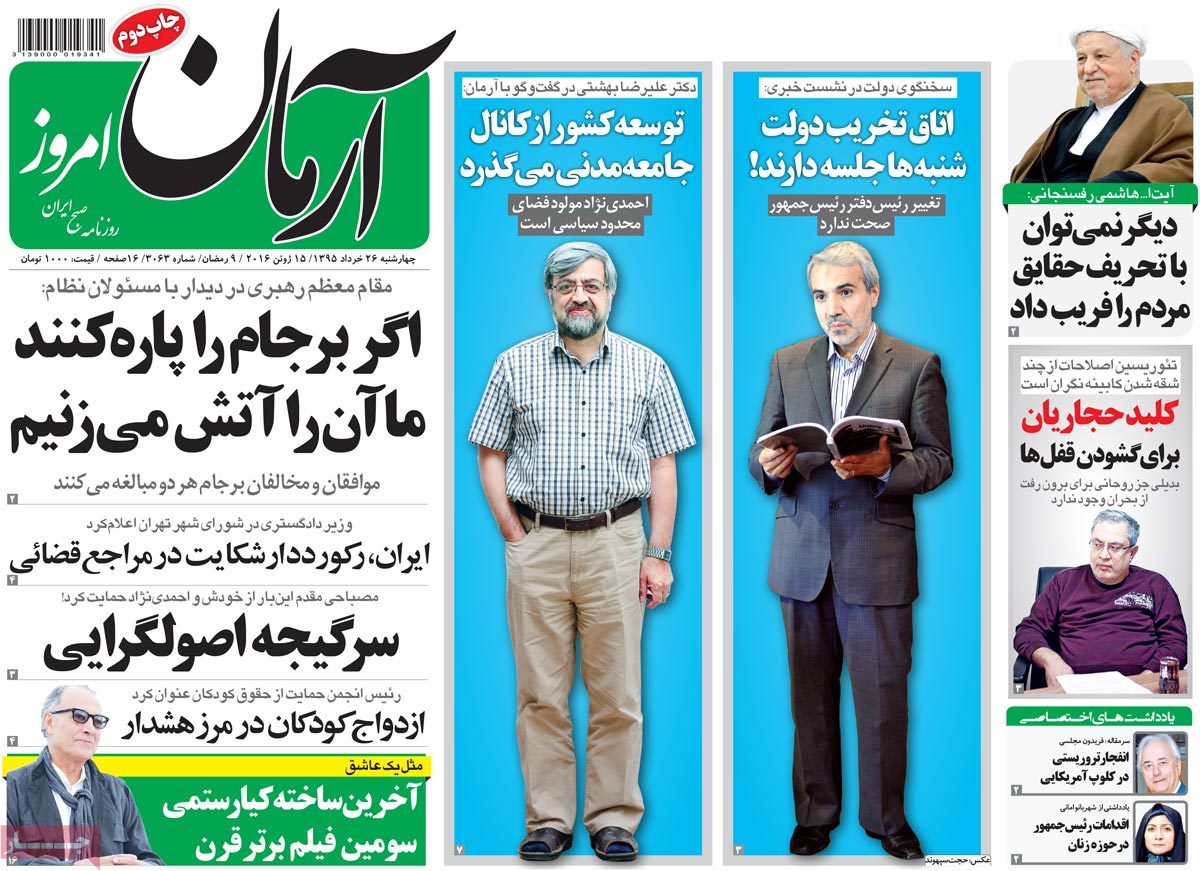 1- US Treasury Becomes Guide to Investment in Iran 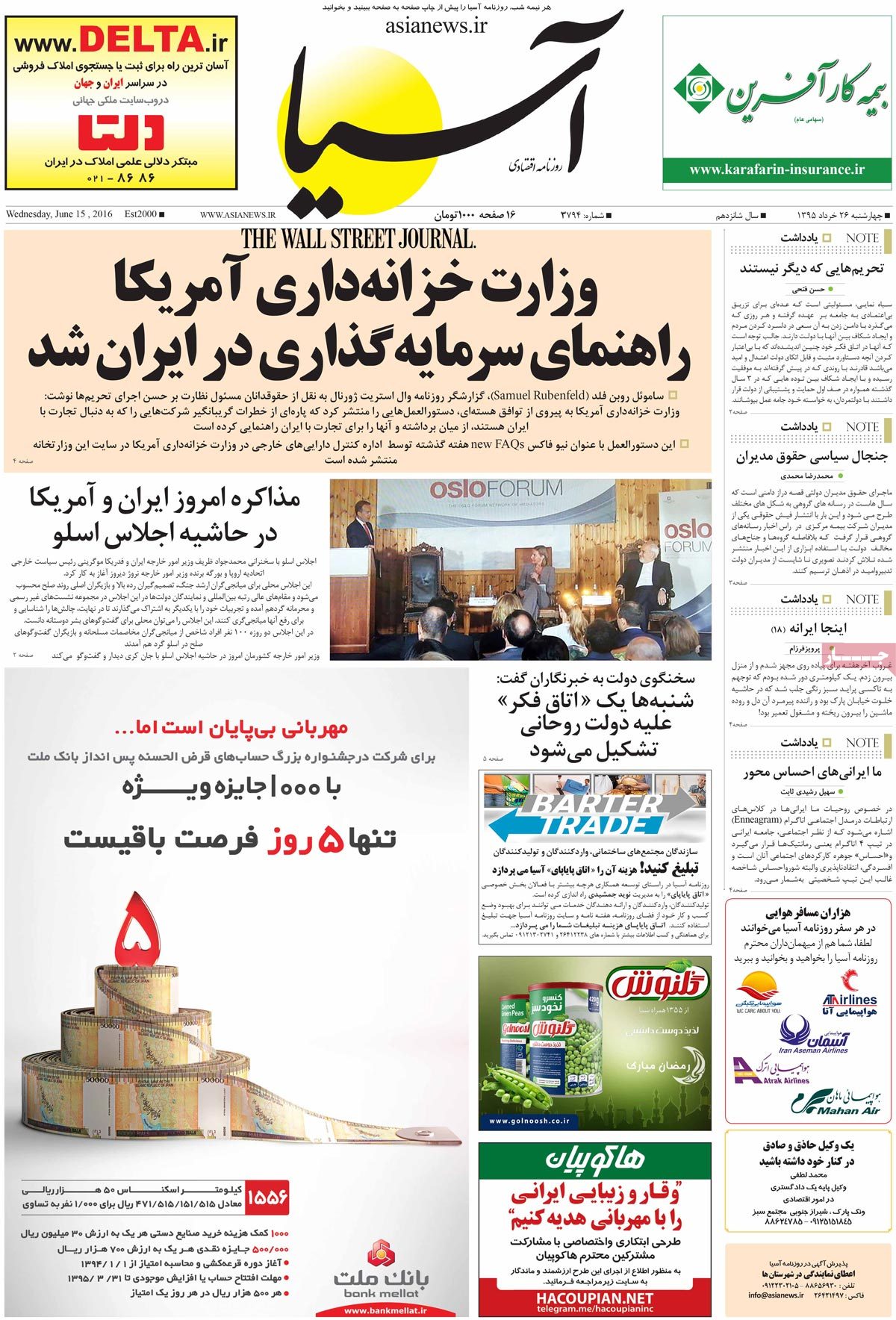 1- Inflation, Downturn, and Unemployment Are Inheritance of Previous Gov’t: Rafsanjani 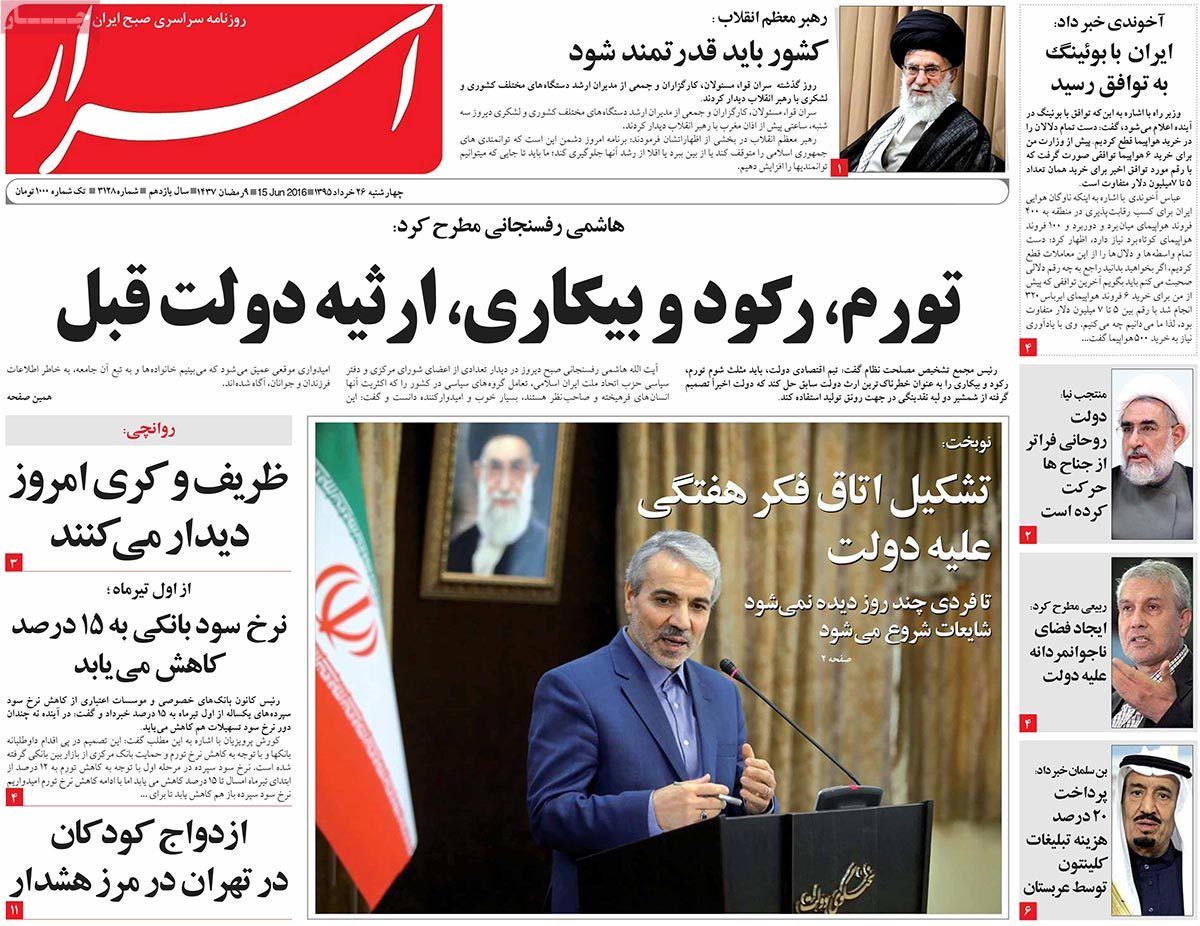 1- Exclusive Interview with Cannes Film Festival’s Director [Thierry Fremaux]: We Don’t Give Recommendations to Juries for Any Movie 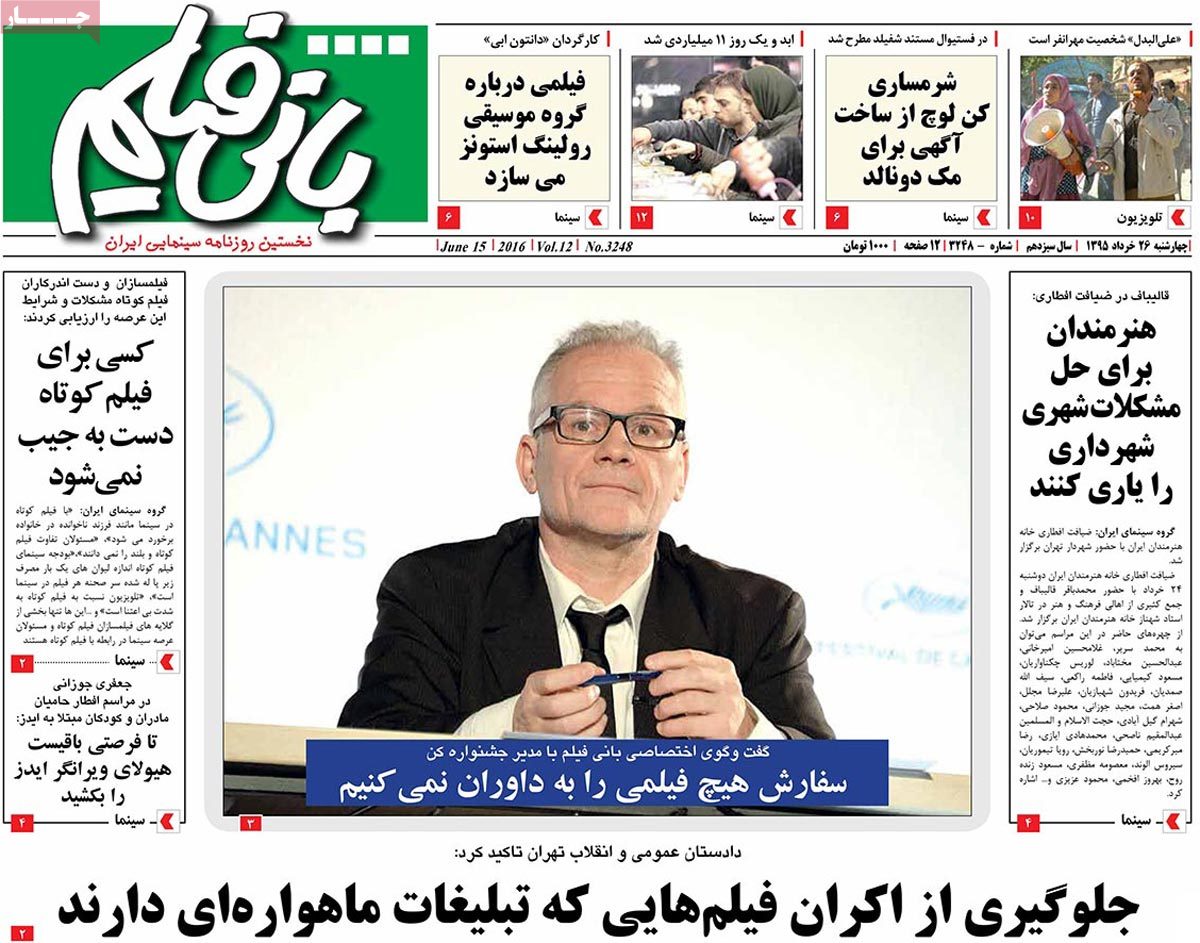 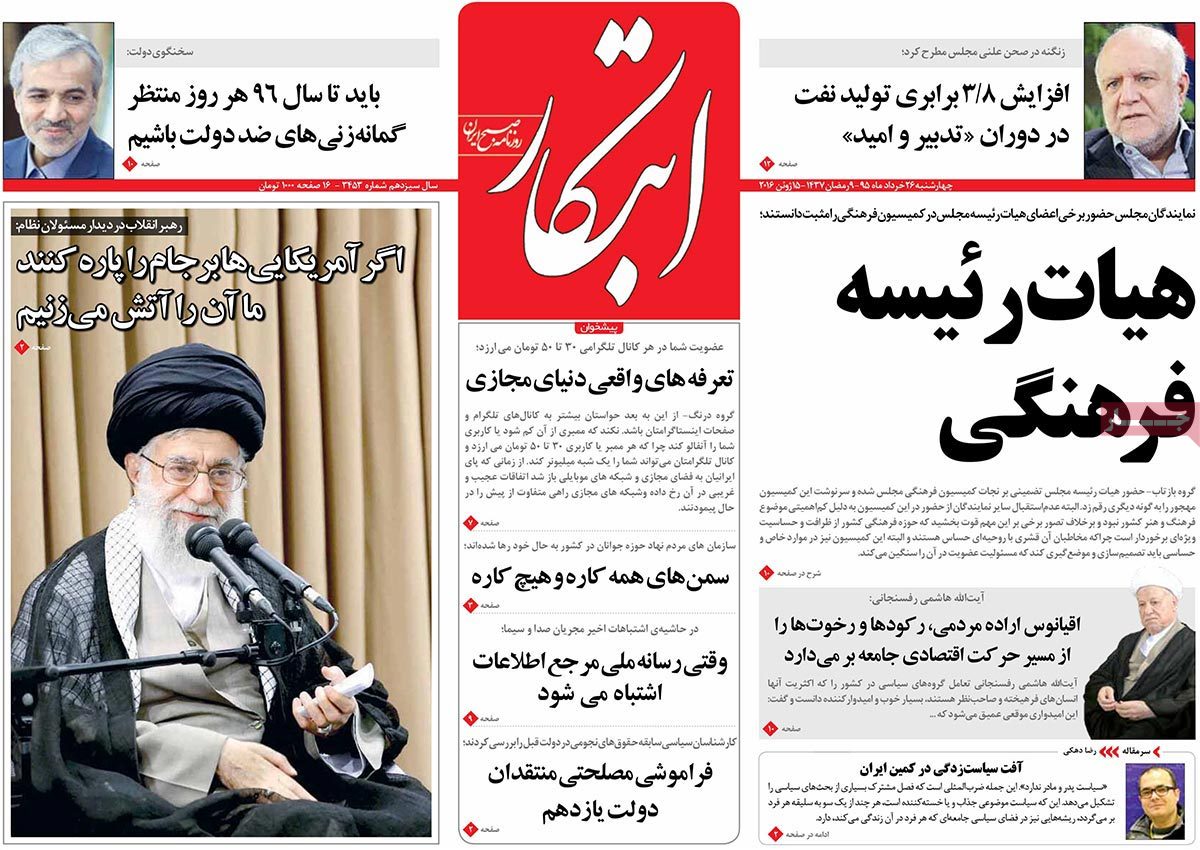 1- Iranian Films Advertised on Satellite Channels to Be Banned from Public Screening: Prosecutor-General 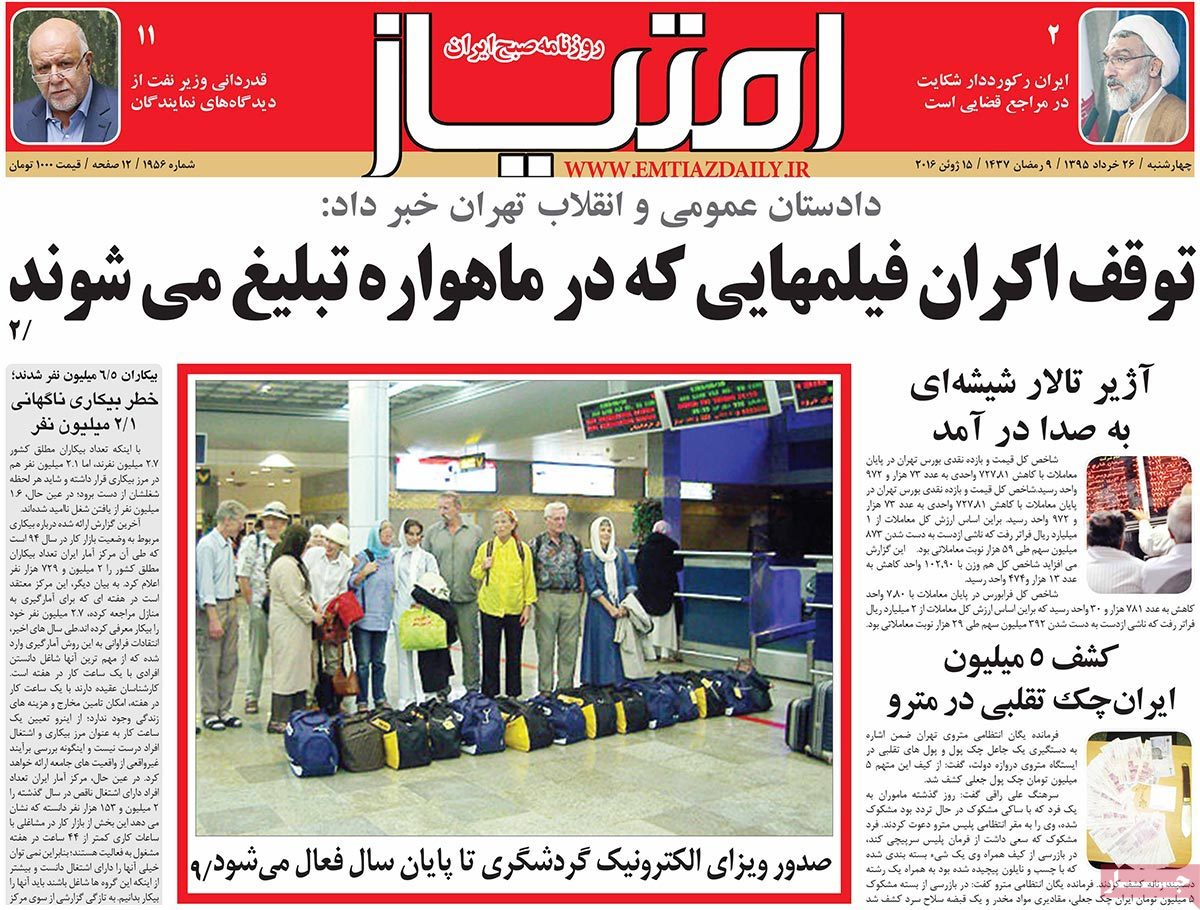 1- In JCPOA, Other Party Has Failed to Fulfil Its Duty, Which Was Removing the Sanctions: Leader 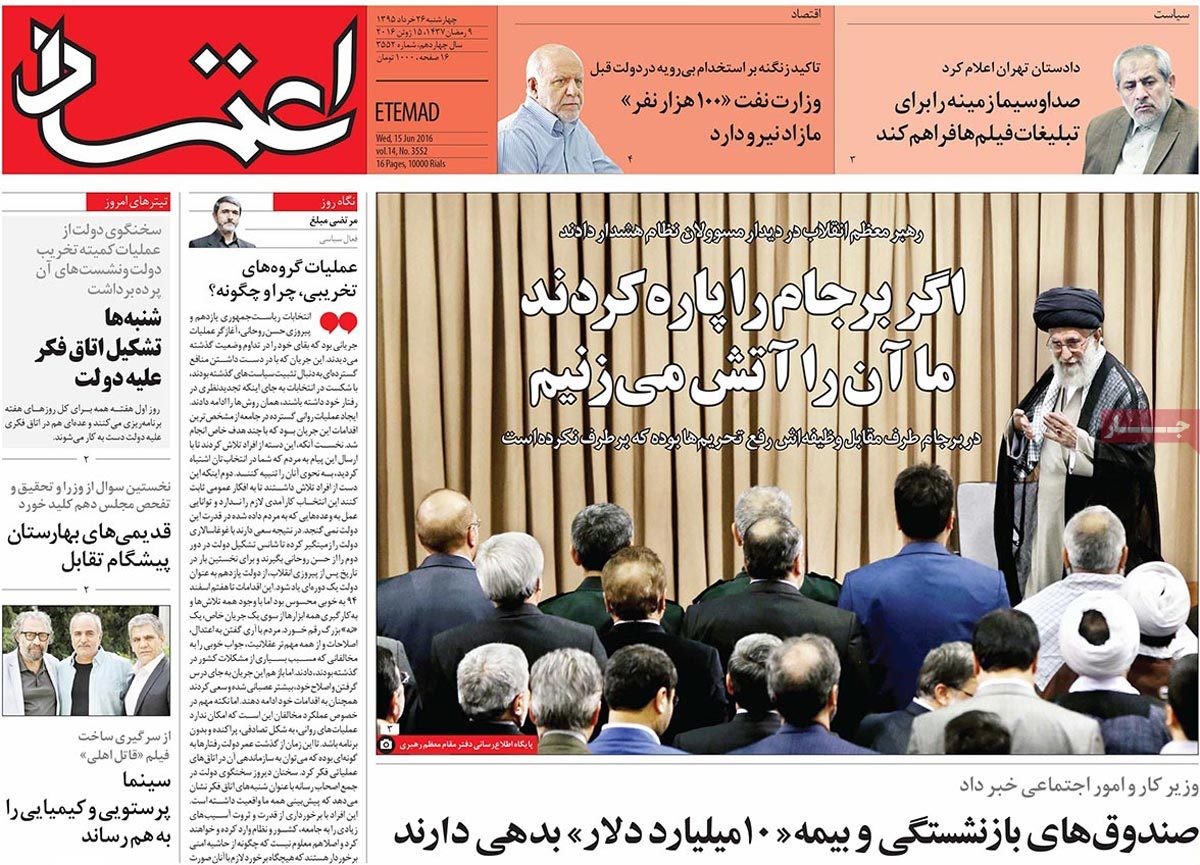 2- Women Are Problem-Solvers, Not Problems: President

3- Criticism of JCPOA Is Not at All Criticism of Our Dear Brothers, It’s an Evaluation of Other Party’s Performance: Leader 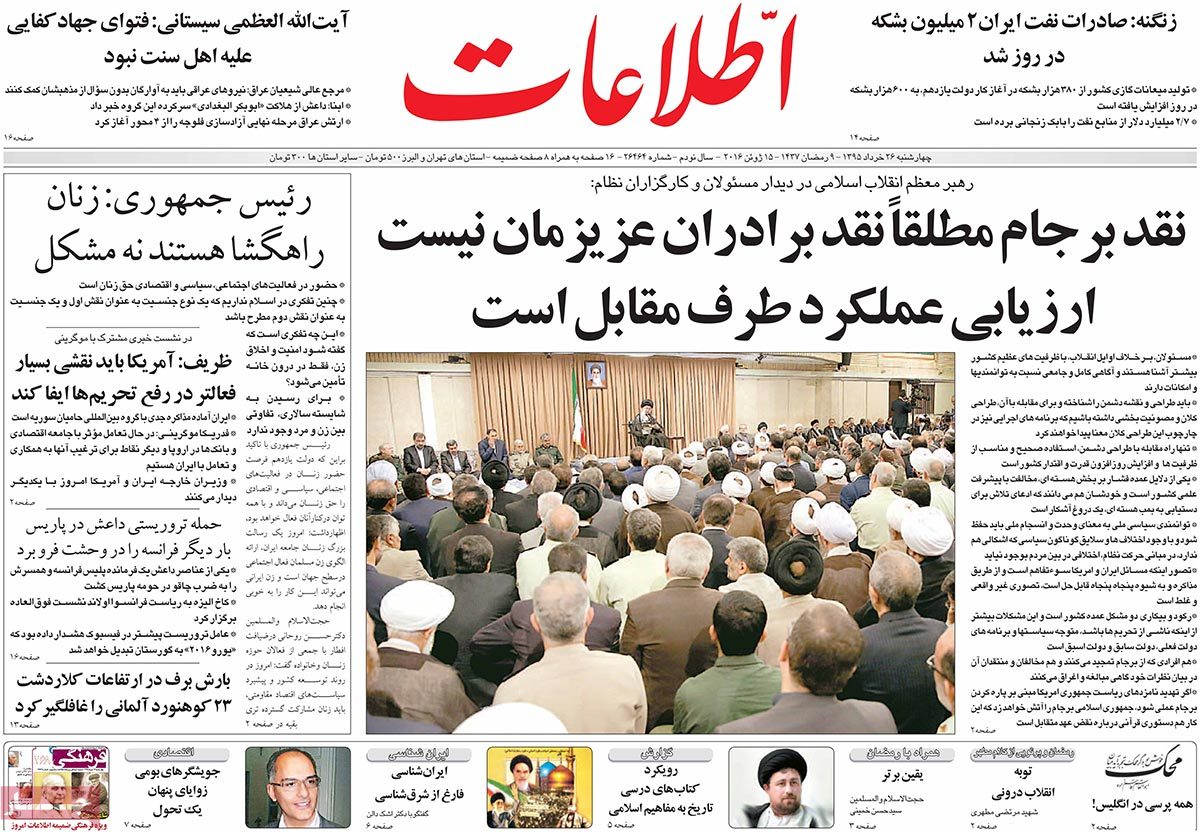 1- JCPOA Has Both Positive and Negative Points: Leader

2- Resistance Economy Is Not Isolation from the World: Zarif’s Important Speech in Oslo

2- Recession and Unemployment Are Caused More by Government’s Policies and Plans than Sanctions: Leader 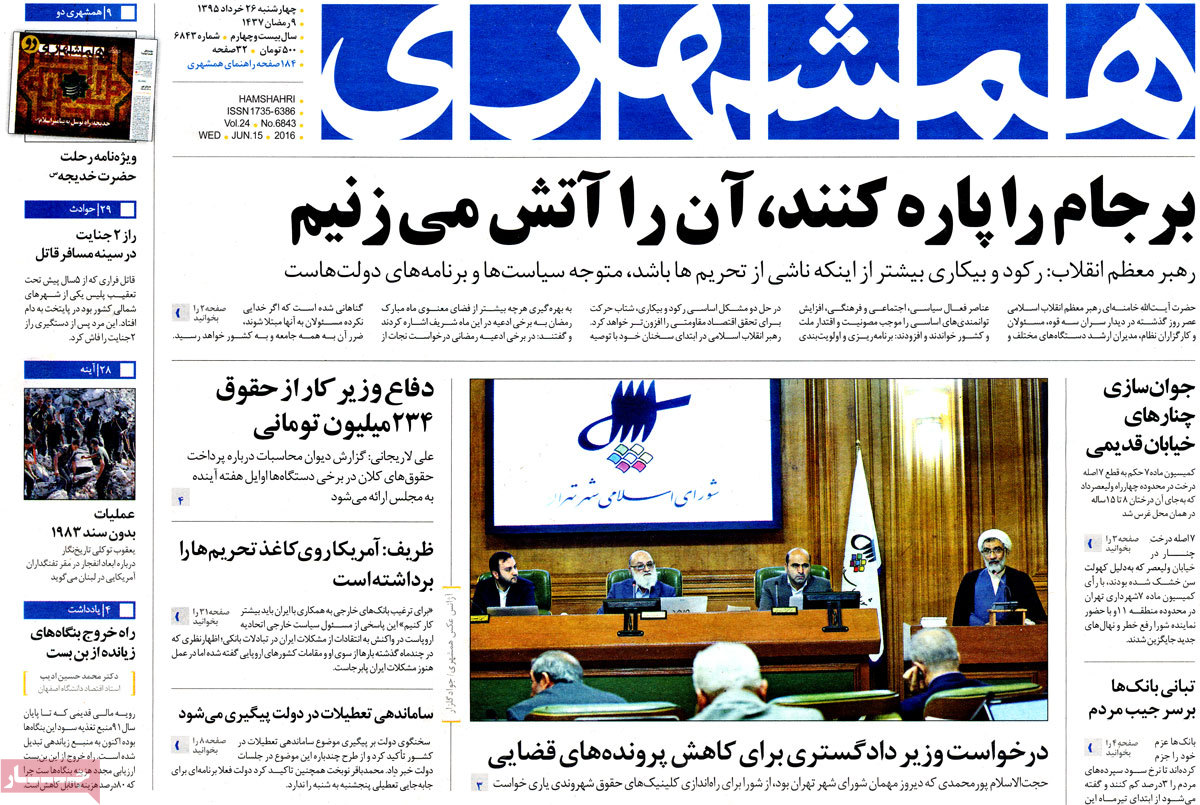 3- Effective Consultation between Iran and Europe for Resolving JCPOA Problems 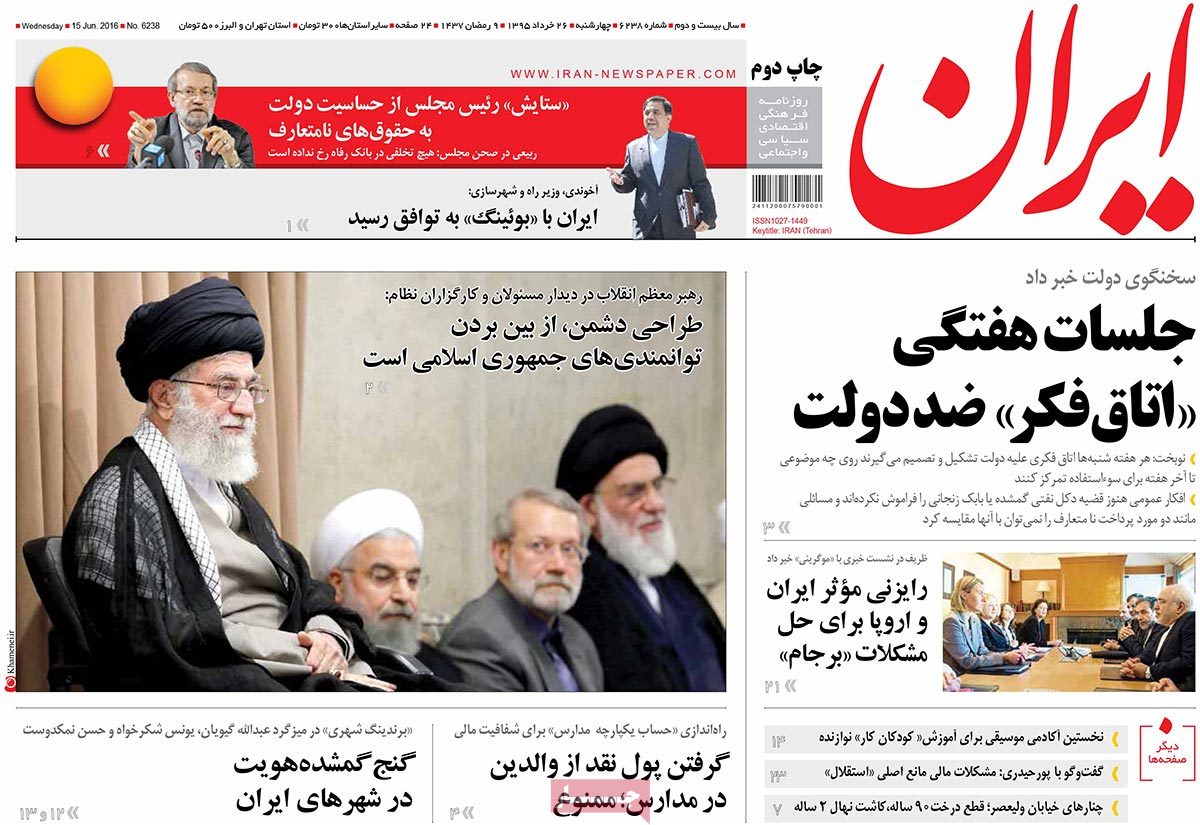 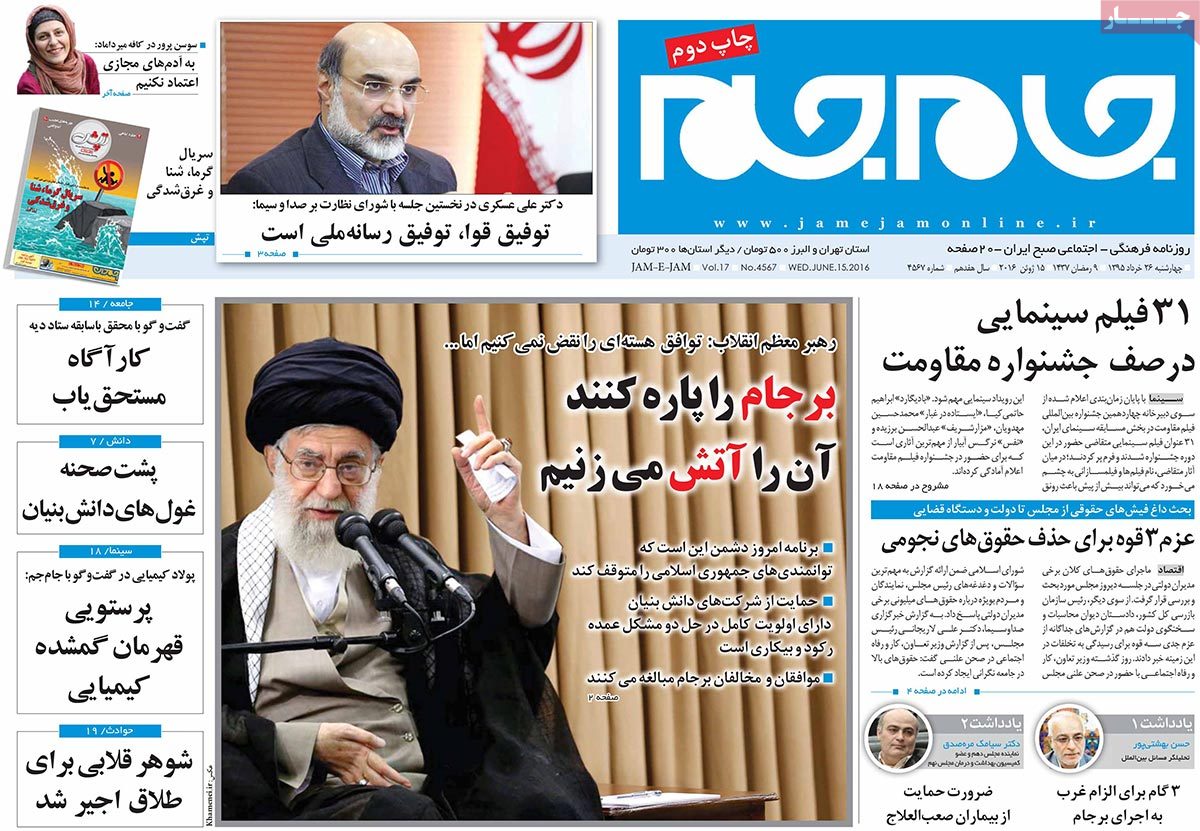 1- We Cannot Rely on Illusion of “Coming to Terms with US”: Leader

3- Zarif, Too, Joins Government “Almost Nothing” Campaign: US Has Just Removed Sanctions on Paper, FM Says 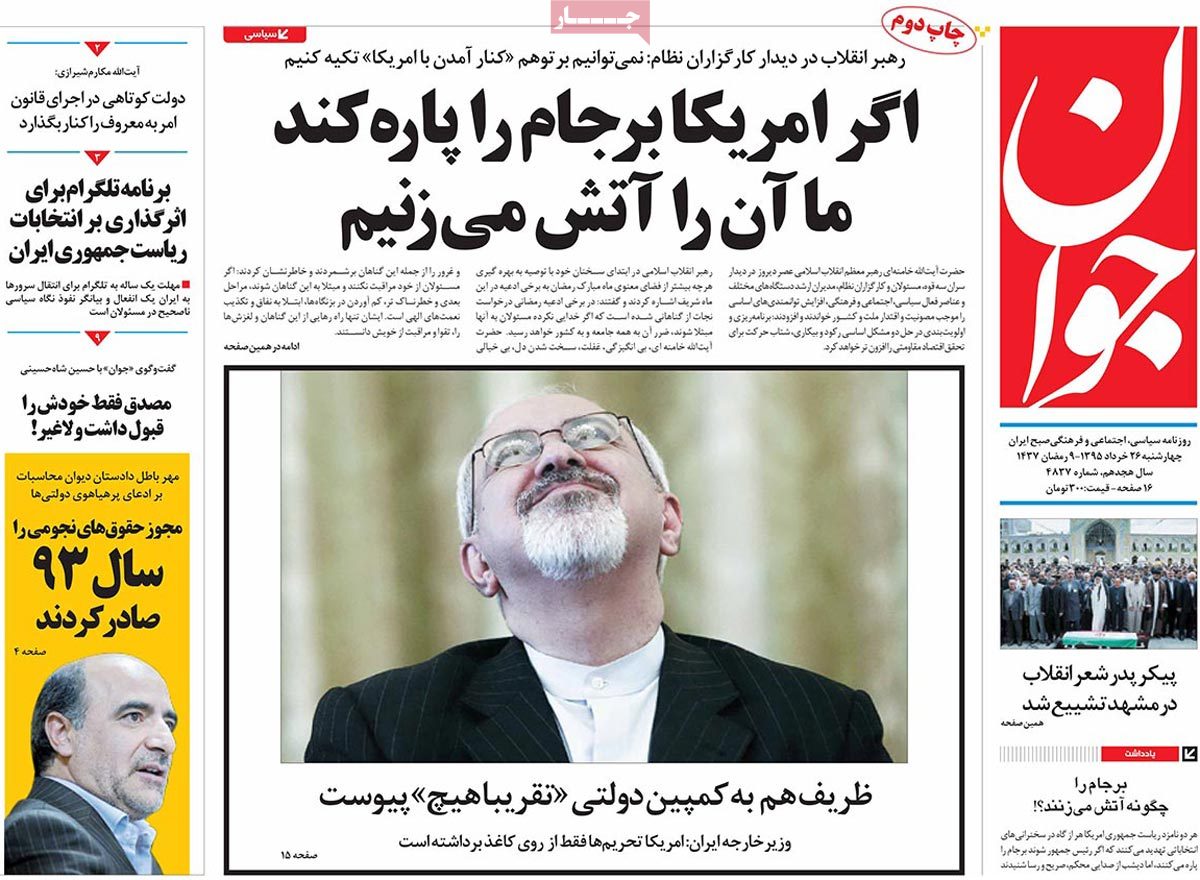 1- We Should Boost the Country’s Capabilities: Ayatollah Khamenei

2- We’ll Not Violate JCPOA, But If They Tear It Up as US Republican Candidates Say, We’ll Burn It: Leader

1- If Americans Tear UP the JCPOA, We’ll Burn It: Leader

2- I Have Greatest Respect for Revolutionary and Religious Youth: Leader 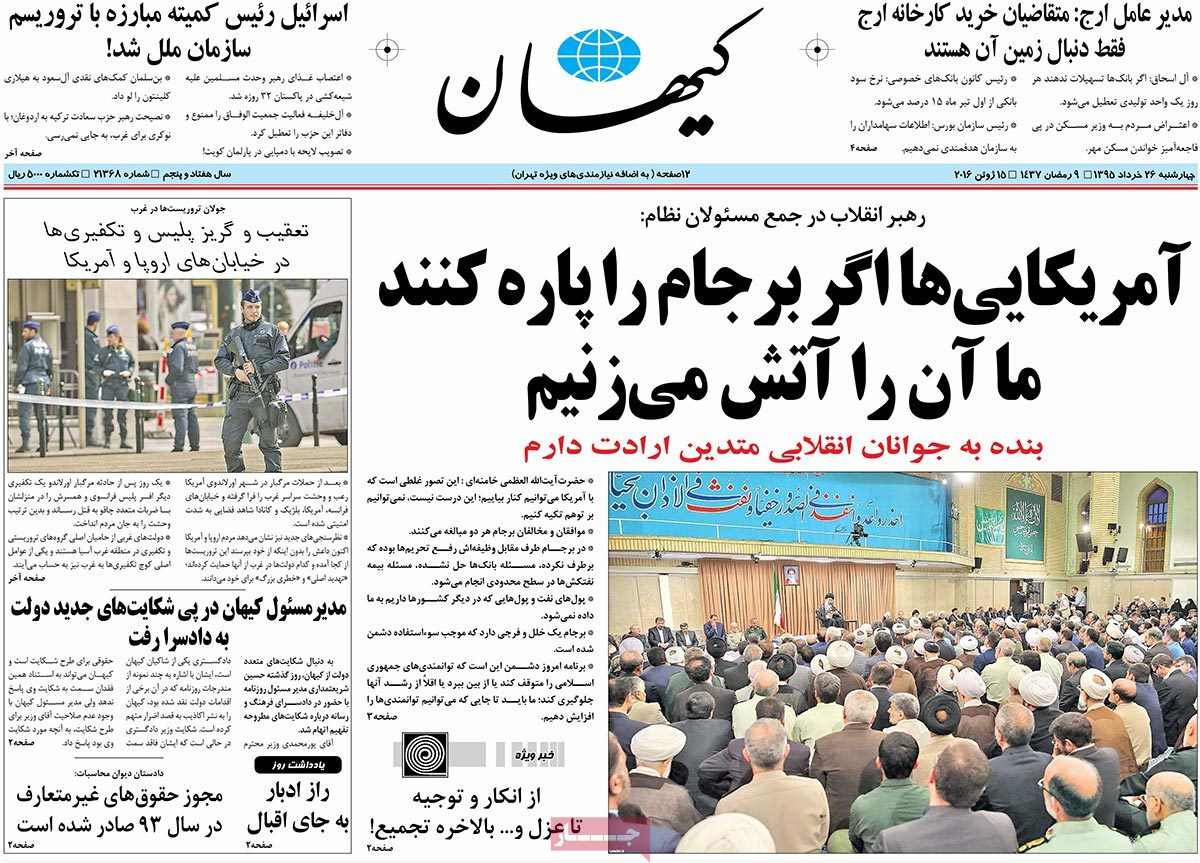 2- Orlando Shooter Was a Member of Gay Club Himself: AP 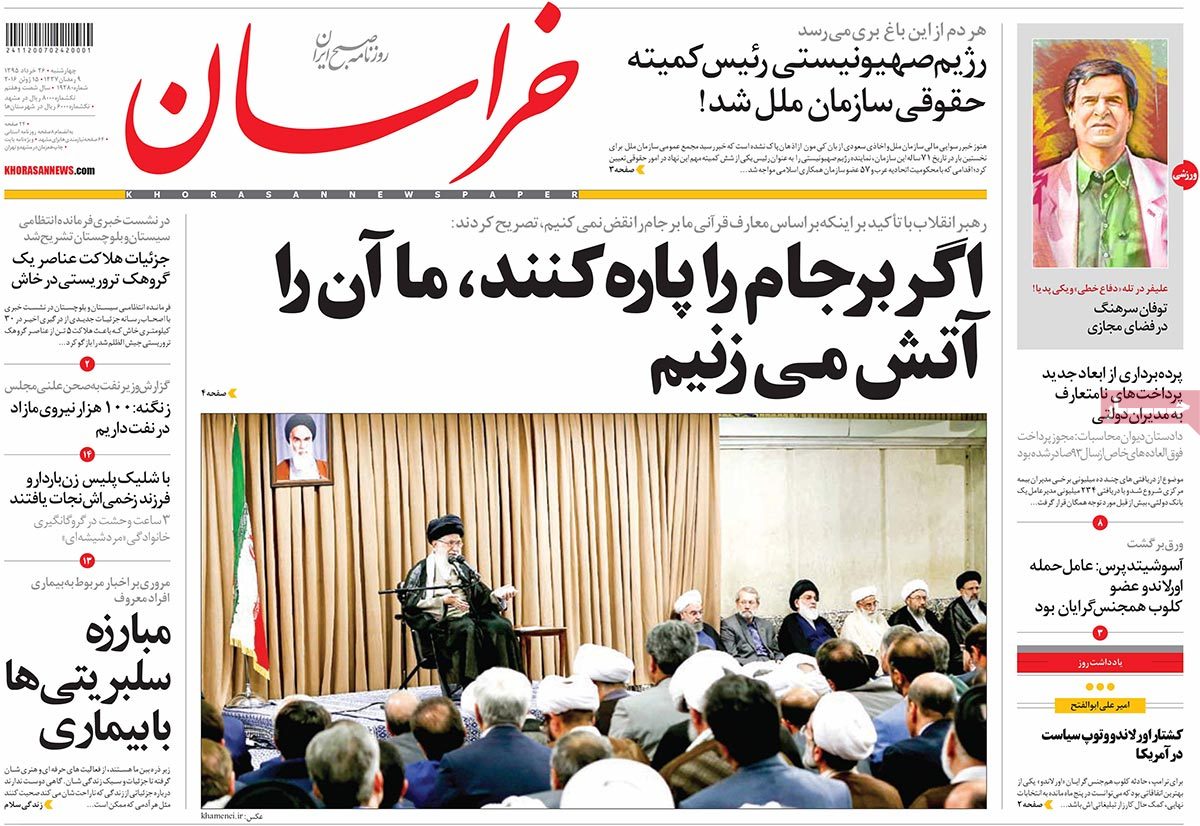 2- Saudi Role in US Elections: US Polls Taste of Oil and Blood 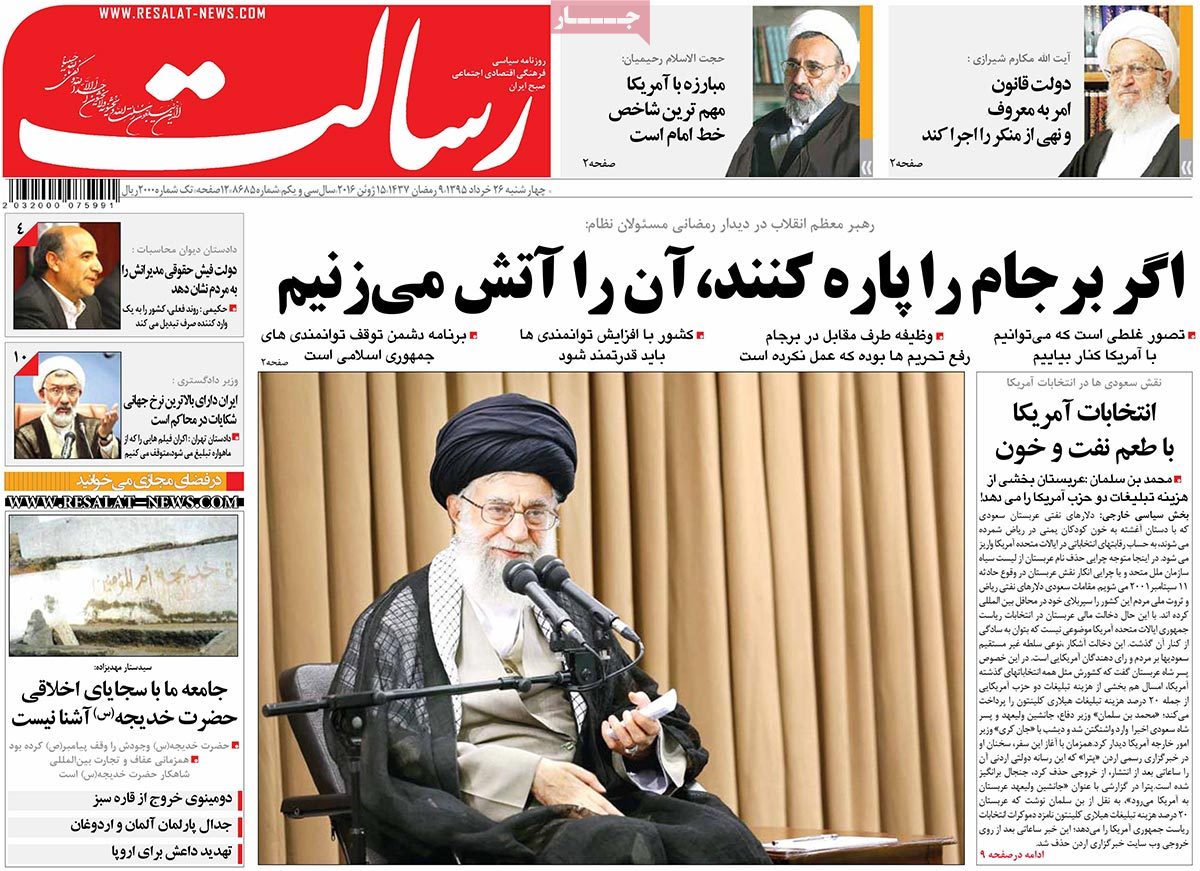 1- Like Someone in Love: Kiarostami’s Latest Work Chosen as Century’s Third Best Film 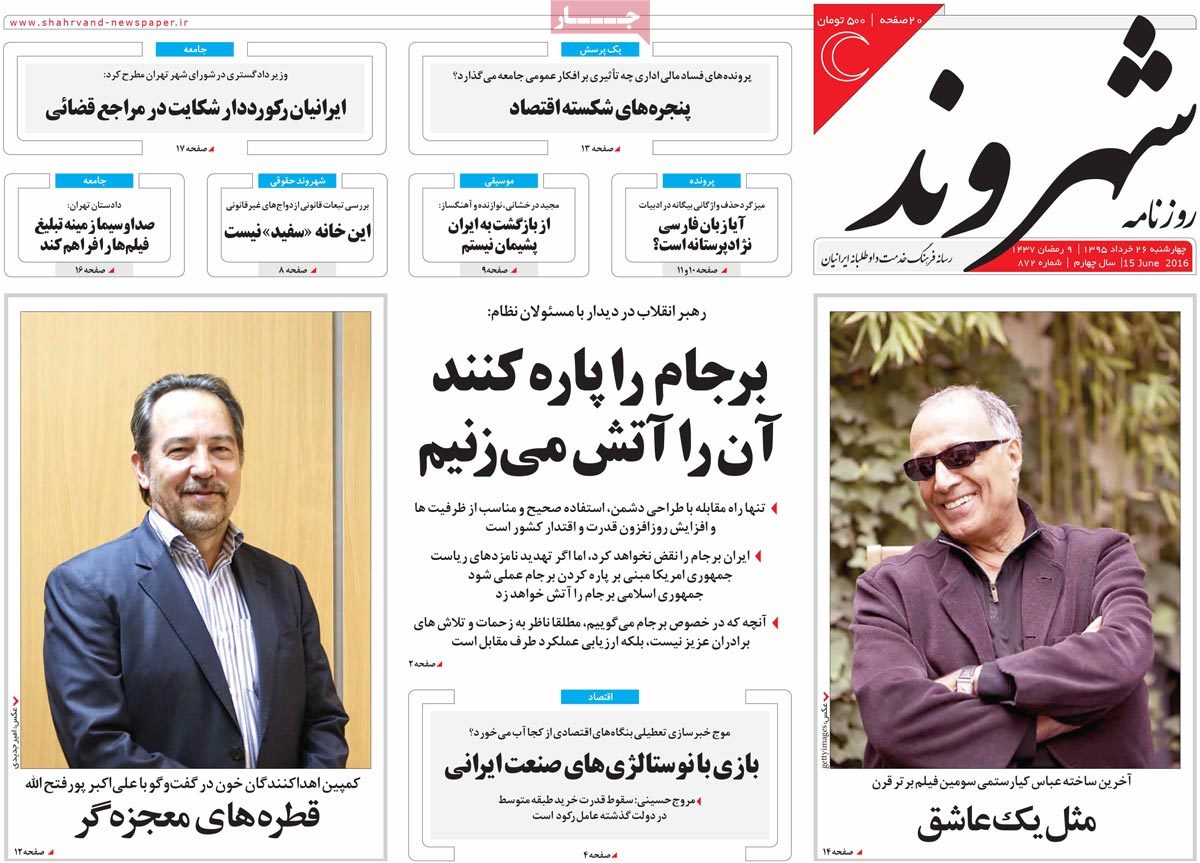 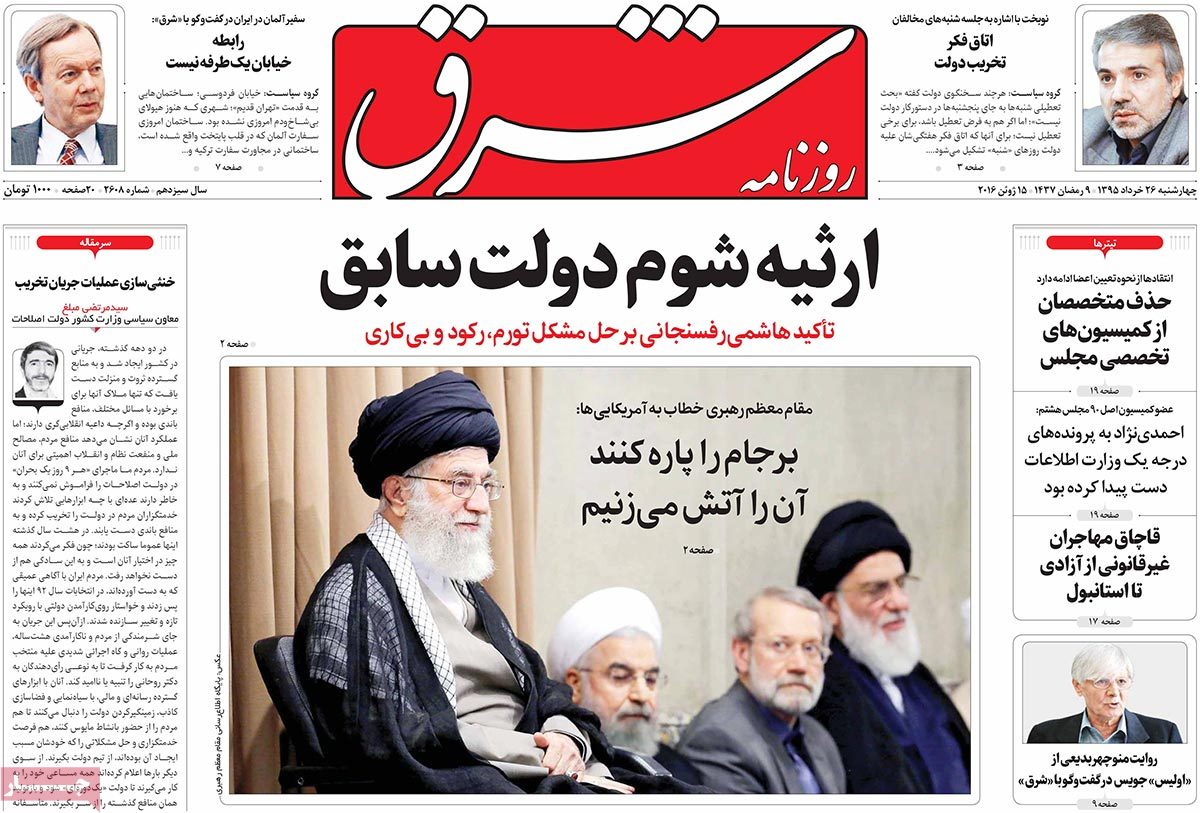 1- Saudis Worried about Collapse of Regional Order and Emergence of Iran: Immediate Challenge in Middle East Is Resolution of Tehran-Riyadh Tension 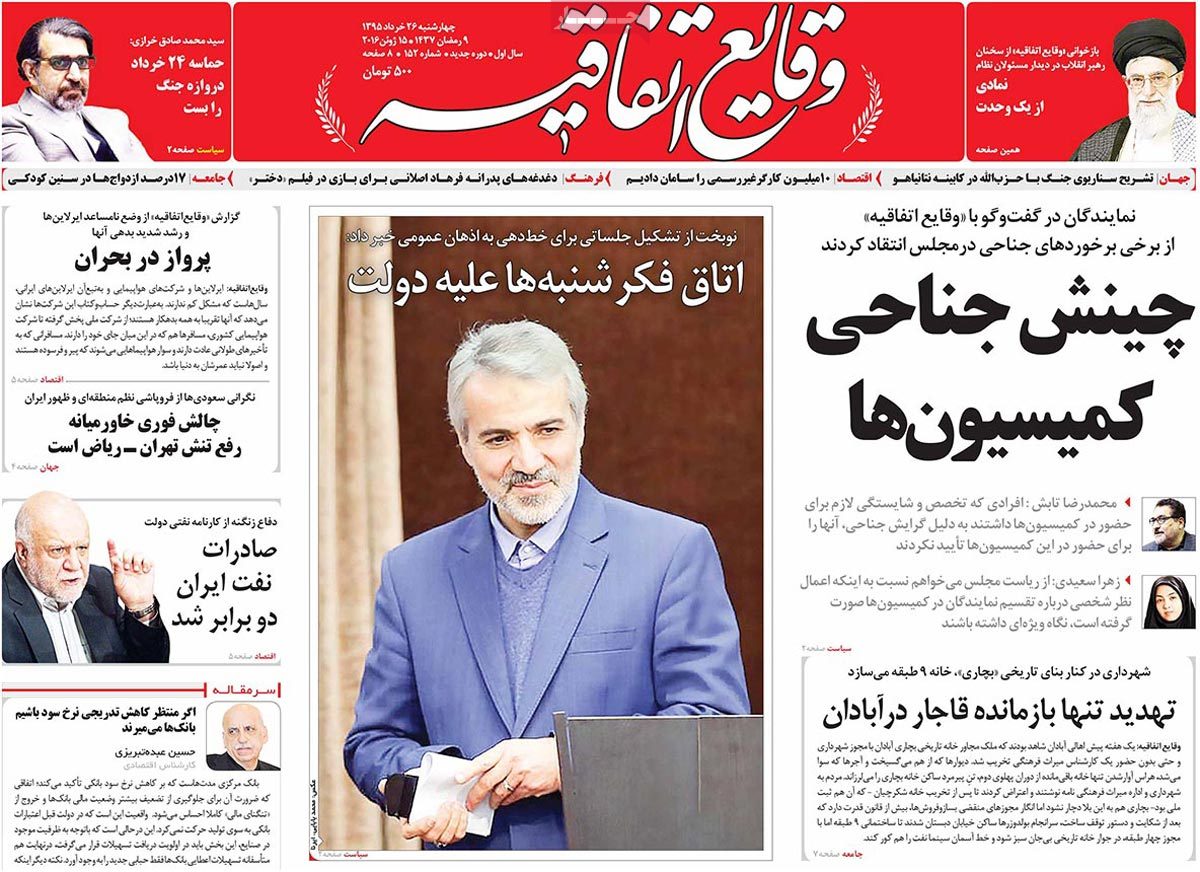 1- US Failed to Fulfil Lion’s Share of Its Commitments: Leader 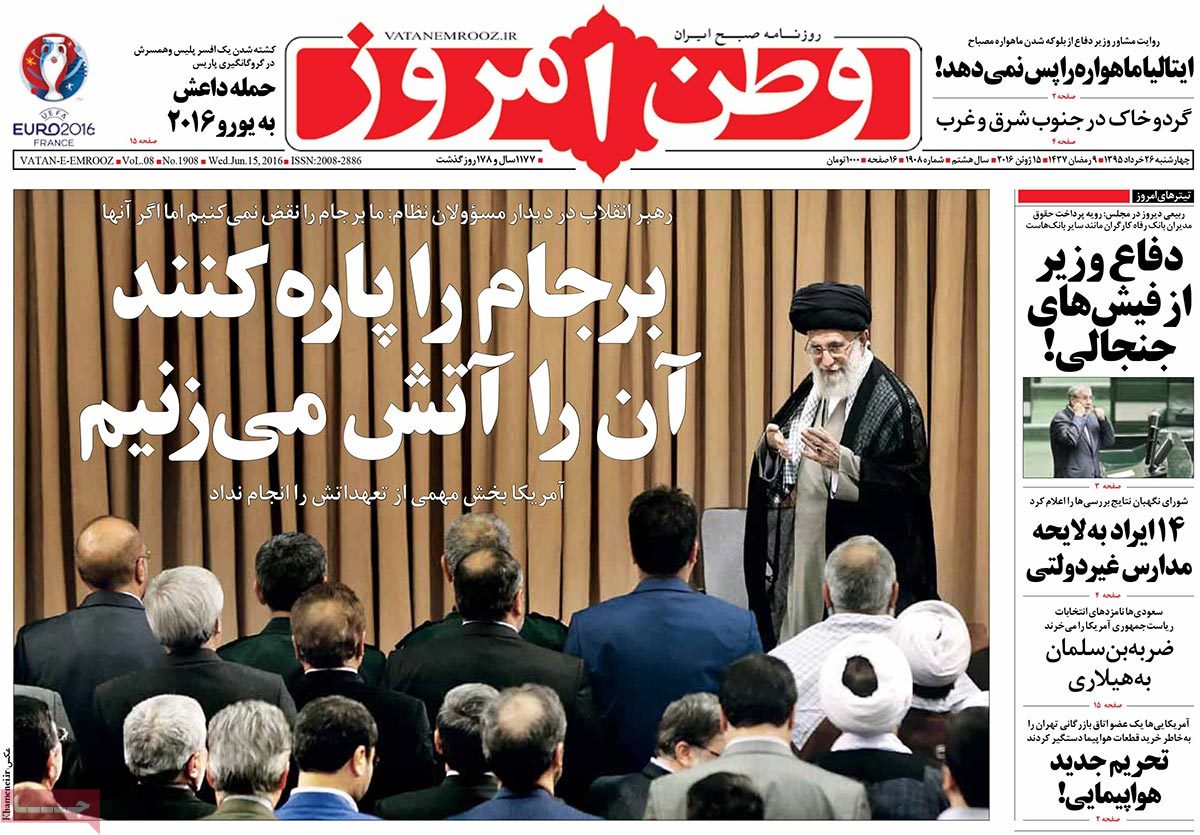