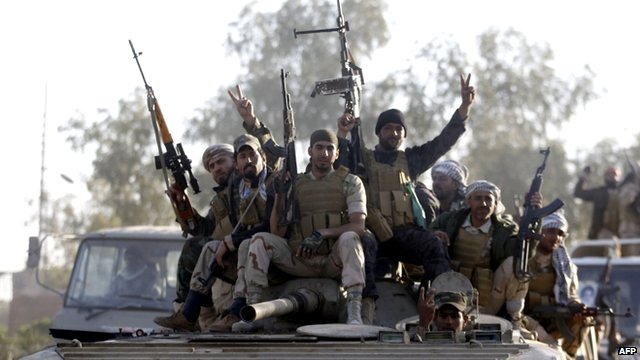 Alwaght- Fall of Iraq’s Fallujah in Al Anbar province in January 2014 to the terrorists of ISIS was considered a stepping stone for the terrorist group to gain ground in Iraq and so to make headlines during the latter two and a half years.

Perhaps in the initial months of its emergence nobody imagined that ISIS would capture Iraq’s second-largest and most populated city of Mosul in June the same year, and shortly later on July 5, Abu Bakr al-Baghdadi, the leader of the terrorist group, announcing foundation of his so-called caliphate.

However, two years after capture of the eastern city, the liberation operation was launched on May 23, 2016 with an order from the Iraqi Prime Minister Haider al-Abadi with participation of Iraq’s armed forces as well as the Public Mobilization Forces (PMF) — a popular anti-terror force formed specifically to battle ISIS.

With a sweeping advance of the Iraqi forces and tightening the encirclement on the terrorists, it was expected that the liberation of the city would take place within a short time. But just contrary to the expectations, this didn’t happen, and we are yet to see retaking and cleansing Fallujah’s center of the terrorists.

Concerning the delay in retaking of the ISIS-held city, the Saudi role must be considered crucial. Right after launching the liberation assault by the Iraqis, the Saudi officials negotiated with the Iraqi government in a bid to get a 36-hour delay of the decisive operation.  Then, following entry of the army and PMF units in Fallujah, the Saudis raised the issue of religious conflict between the Sunnis and the Shiites.

The fact is that such an approach by Riyadh and lack of commitment of the Saudis to guarantee of ISIS forces’ exit from Fallujah have played a key role in the terrorists’ re-energization and consequently delay in gaining a full control of the city by the Iraqi forces.

Let’s first have an analysis of demands and remarks of the Saudi officials during the days following start of Fallujah recapture process. Then we will elaborate on the double standards and divisive policies of Saudi Arabia concerning liberation of the embattled city.

In the wake of beginning of progresses of Iraq’s army along with PMF, according to the reports of sources close to the Alwaght news, the Saudi ambassador has met with the Iraqi defense ministry’s officials, delivering a message to Baghdad. According to the message, the terror group expressed commitment to facilitate takeover of Fallujah by the army and PMF.

The Saudi ambassador to Iraq took as an excuse presence of about 300 Saudi women in Fallujah and avoiding killing of the civilians to ask Baghdad to postpone the armed forces’ operation for 36 hours.  In return, Riyadh said that it guaranteed withdrawal of ISIS terrorists from the city during this time span.

Meanwhile, Abu Hashim Fenyan al-Wilaee, the chief of Sayyed al-Shohada Brigade belonging to Iraq’s PMF, has asserted that the Saudi ambassador sought safety of the terrorists through calling for 36-hour cessation of the military operation. However, not only the Saudi Arabian officials did not keep their commitment to ISIS’ pulling out of the city but also they paved the way for ISIS’ rebuilding its strength.

Following entry of the Iraqi army troops and the PMF to Fallujah and spread of the news on violations against the civilians by the Iraqi forces, the Saudi ambassador in Baghdad Samer al-Sabhan has claimed on his Twitter page that Iran was intervening in Iraq’s internal affairs, adding that the sectarian conflicts would burn Iraq into ashes.

Saudi Arabia’s al-Sabhan has attempted to paint the violations of a couple of Iraq troops, who were ordered by PM al-Abadi to be tried and punished, as a revenge of the Shiite forces on the Sunni civilians, and the liberation of the Fallujah from the grasp of the terrorists of ISIS as an Iran-led sectarian Shiite war against the Sunnis in Iraq.

Reacting to the stances, Ahmed Jamal, the spokesman for the Iraqi foreign ministry has said in a statement that to continue liberation of other Iraqi cities from the hold of ISIS the Iraqi government needed international support, and it was only the Iraqi government which reserved the right to decide on requesting advisory help from the allied countries. He added that the Iraqi officials were trying to assure humanitarian aids to Fallujah’s and other cities’ residents and also their security.

In an overall analysis of these events, it must be noted that, first, Saudi Arabia’s negotiations with Iraq and demanding 36-hour break of the operation was a pre-planned policy of Riyadh to help ISIS restore powers and foil Fallujah liberation operation. Second, Saudi ambassador’s calling the anti-terror operation as a sectarian revenge war of the Shiites waged against the Sunnis is a precise plan of the Saudi officials to reduce the decisive anti-ISIS operation to a religious hostility.

The fact is that the Saudis have become critical of the Iraqi developments and the key role of the Shiite Muslims following toppling of the former Iraq’s dictator Saddam Hussein in 2003. They, actually, spared no efforts to foil the Iraqi government.

The new Iraqi developments as a result of rise of ISIS in Iraq were seized as an opportunity by Riyadh to pursue their agenda of impairing the Shiites. Third, the remarks of Iraq’s spokesman for the foreign ministry could be understood as a reaction to indirect objections of Riyadh to close cooperation of the central Iraqi government with Iran. While the Saudi leaders are strongly against an active role of Iran in Iraq, the Iraqi officials, by expressing the need of the international anti-terror coalition’s help to Baghdad, speak out against the Saudi Arabian stances against the Islamic Republic’s anti-terror role in Iraq.