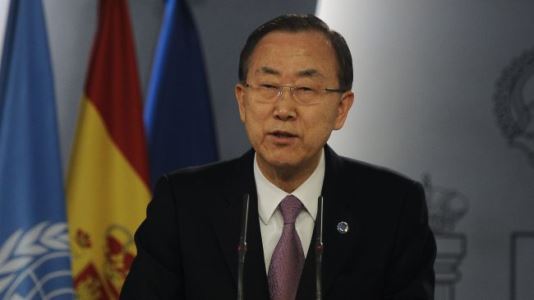 UNITED NATIONS — The United Nations secretary general is supposed to answer to every nation on earth — and no nation at all.

So the unusually frank admission by the secretary general, Ban Ki-moon, on Thursday that he had essentially been coerced into removing a Saudi-led military coalition in Yemen from an ignoble list of armies that kill and maim children was a rare window into the limits of his moral and political authority — and an object lesson for whoever succeeds Mr. Ban next year.

On Thursday, Mr. Ban told reporters that he had been threatened with the loss of financing for humanitarian operations in the Palestinian territories, South Sudan and Syria if he did not temporarily delete the Saudi-led coalition from the list.

The coalition has been accused of indiscriminately bombing civilian and nonmilitary targets in its battle against Houthi rebels in Yemen for more than a year. The coalition, which is backed by the United States, has consistently denied the accusations.

Mr. Ban’s office issued a report last week on violations of children’s rights in war zones, and it cited deadly coalition attacks that had hit schools and hospitals. By Monday, however, the coalition was taken off the list, after lobbying by Saudi Arabia and some of its wealthiest allies who help finance United Nations humanitarian operations.

Mr. Ban offered his explanation Thursday, saying, “I also had to consider the very real prospect that millions of other children would suffer grievously if, as was suggested to me, countries would defund many U.N. programs.”

By the standards of mild-mannered diplomat-speak, he went on to issue an uncustomarily direct rebuke. “It is unacceptable for member states to exert undue pressure,” he said. The Saudi ambassador promptly asserted that there had been no undue pressure.

Mr. Ban is wrapping up his 10-year tenure, and world powers are beginning to bargain over who his successor will be and just how independent she or he ought to be.

Secretaries general have frequently faced intense political pressure from countries large and small, and Mr. Ban’s time in charge has been punctuated with a number of awkward compromises.

Last summer, Mr. Ban reversed course on his list of armies and guerrilla groups that violated child rights in war. In that instance, his special representative for children and armed conflict, Leila Zerrougui, recommended that the Israel Defense Forces and Hamas be included on the list for their role in bombing schools and hospitals and otherwise breaking international law during the 50-day war in the Gaza Strip in 2014.

Israel was consulted before the release of the report, Mr. Ban’s aides said at the time, and both Israeli and American diplomats lobbied intensely against the listing. In the end, both Israel and Hamas were kept off the list. Mr. Ban declined to address reporters’ questions on the matter at the time, leaving it to his envoy, Ms. Zerrougui, to explain the redaction.

The generally risk-averse Mr. Ban has tried to step out a bit more during his last year, but he has also repeatedly had to step back.

In March, on a rare visit to a camp that houses refugees from Western Sahara, Mr. Ban used the term “occupation” to refer to Morocco’s 1975 annexation of territory that the Sahrawis claim as theirs. The Moroccan government responded by ejecting dozens of United Nations staff members, effectively kneecapping the peacekeeping mission there.

Morocco has a powerful ally in France, a veto-wielding member of the Security Council, which helps explain why the Security Council said nothing to persuade Morocco to reverse its decision. That left Mr. Ban on his own, and within days, his spokesman was compelled to swallow his words.

“We regret the misunderstandings and consequences that this personal expression of solicitude provoked,” said the spokesman, Stéphane Dujarric.

Perhaps Mr. Ban’s most awkward moment came when he sought to act independently of the United States. In January 2014, he invited Iran to United Nations-brokered political negotiations over Syria, only to be advised by American officials to rescind the invitation, according to interviews with diplomats at the time.

A day after he publicly announced the invitation, he appeared before reporters and said Iran could not attend. The State Department made its opposition clear, and demanded that Iran first accept certain conditions that it knew Tehran would find unacceptable. One of Mr. Ban’s aides said he felt betrayed.

Asked at a news briefing on Thursday about Mr. Ban’s admission of Saudi pressure, a State Department spokesman, Mark C. Toner, said, “We agree with the secretary general that the U.N. should be permitted to carry out its mandate, carry out its responsibilities, without fear of money being cut off.”

Pressed about American threats to cut off funding, Mr. Toner said, “I’m aware of our own track record.”

Eleven people have so far declared their candidacy to succeed Mr. Ban when his term expires at the end of this year. A few others are expected to throw their names into the race in the next few weeks.

The president of the General Assembly, Mogens Lykketoft, who has held the first-ever public hearings for the candidates, has used the terms “independent” and “courageous” to describe his ideal future secretary general.

That may be unrealistic. It is really up to the five permanent members of the Security Council to choose the next head of the organization, and while many of them have said they want a strong secretary general, they have also avoided calling for one who is independent.

As for the Saudi-led coalition, Mr. Ban said he would jointly review the claims made by his special representative, who accused the coalition of indiscriminate attacks against children. Privately, diplomats say such a review could drag on until it vanishes from public memory.

Saudi Arabia flatly denied that it had exerted any pressure. “No, of course not,” the ambassador, Abdullah al-Mouallami, said in a telephone interview. “It is not our style. It is not our culture. It is not our spirit to use threats or intimidation.”

He did say that he had met with Mr. Ban’s deputy, Jan Eliasson, a Swedish diplomat, on Monday and expressed his concerns about the listing. He said he told him that “it would have an adverse impact on relations between Saudi Arabia and the United Nations.”

This article was written by Somini Sengupta for The New York Times on 09-2016.