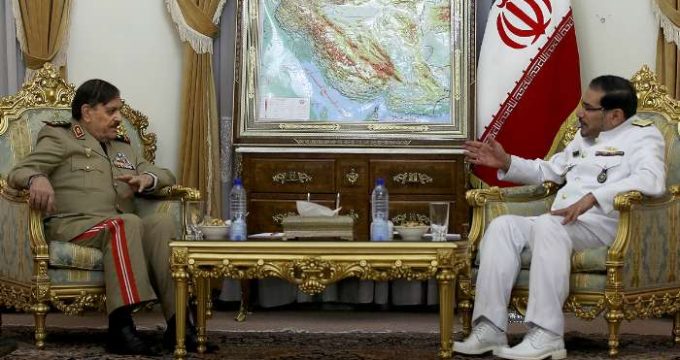 Speaking in a meeting with Syrian Defense Minister Fahd Jassem al-Freij, Shamkhani voiced satisfaction over the outcome of the Iran-Syria-Russia tripartite meeting on confronting terrorism and Takfiri groups.

He congratulated his Syrian counterpart on consecutive success of Syrian army and popular forces to wipe out considerable parts of different parts of Syria from terrorist elements.

Al-Freiji is in Tehran to attend the tripartite meeting with defense ministers of Iran Hossein Dehqan and of Russia Sergei Shoigu, which was held in the Iranian capital on Thursday.

Shamkhani underlined that the Islamic Republic of Iran will continue supporting Syria to uproot the terrorist groups being present in the country.

He said today, Syria is the scene of confrontation against a highly dangerous plot, which if is not suppressed its roots will spread to entire part of the world.

‘Support for terrorist groups and at the same time, offering diplomatic mechanisms to settle crisis, will be the blatant contradictions questioning honesty of the countries.’

He went on to say that the only way to end the ongoing crisis in Syria will be continuing Syria-Syria talks to achieve the diplomatic initiative agreed upon by the collection of the country’s political groups.

Al-Freiji for his part thanked Iranian leadership, government and people for all-out support for Syria in its campaign against terrorism and said Syrian government and nation will with a firm determination continue a ceaseless campaign until full cleansing of criminal terrorists in Syria.