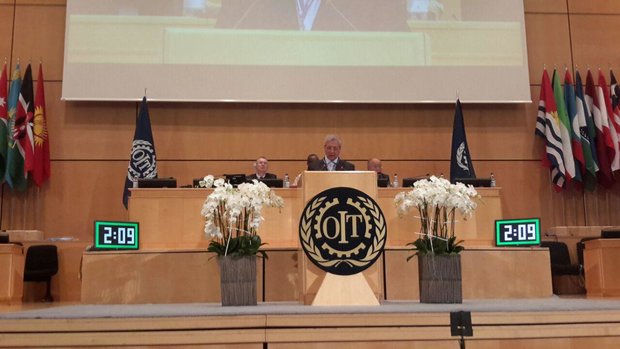 Delivering a speech at the 2016 International Labor Conference (ILC) in Geneva, Iranian Minister of Cooperative, Labor and Social Welfare Ali Rabiei said comprehensive poverty-oriented employment has been put on the agenda.

What follows is the full speech of Iran’s Rabiei at the 150th ILC:

Poverty is a global issue as all countries hold concerns about it; poverty can be defined as failure to meet human needs or lack of minimum facilities to achieve decent living which exerts devastating effects on society. Not using economic potentials, lack of capital for investment, lack of demand for labor, low wages and negative economic growth all mark adverse effects of poverty. Poverty is the root of social harms and corruption and is reproduced through different mechanisms; thus it also affects the moral decline of society. Poverty and class divisions escalate social tensions and put political stability at risk. Communication between negative and inclusive effects of poverty put societies in a ‘poverty trap’ making it extremely difficult to get out of the situation.

Undoubtedly, poverty is not an innate feature to humans; rather, it is shaped as a result of imposed policies and inequalities.

Poverty is created and intensified as a result of long colonization, militarism, globalization, the emergence of rich and poor worlds as well as inequality within societies which I dub as ‘double poverty’ and the International Labor Organization (ILO) is expected not to be indifferent to global inequality conditions.

Despite national and international policies, poverty reduction is faced with theoretical and practical barriers. We require to combine academic studies and practical investigations as well as that international mobilization can be implemented to reduce the gap between theory and practice.

Many countries in the Middle East and North Africa are afflicted with unrest and domestic violence Helpless people have been the victim of violence and foreign military intervention.

Hereby, I would like to present the Iranian government’s program to fight poverty which is in line with the ongoing pattern in developing countries.

The Constitution of the Islamic Republic of Iran has emphasized on ‘health, welfare, food security, social security, equal opportunities, proper income distribution, secure family foundation away from poverty, corruption or discrimination as well as to benefit from favorable environment.’

Instead of charity approach to poverty reduction, we have adopted empowerment policies as in the current year more than 40 million Iranians in rural areas as well as informal sector workers in the city enjoyed free-of-charge health services, and 11 million were backed for food security; furthermore, affordable social insurance for people with a low income in rural areas was provided with the government’s assistance.

A comprehensive plan for children and dropouts has been implemented. Today, the supportive housing program for the disadvantaged has been put on the government’s agenda as the delivery of thousands of houses has already begun.

With regard to employment, comprehensive poverty-oriented employment has been put on the agenda as opposed to traditional methods which were not fruitful.

At the end of my speech, I would like to congratulate all Muslims on the arrival of the holy month of Ramadan. It seems pleasing that Ramadan month holds a special position in Islam and God urges all believers to ponder upon circumstances of the poor in order to feel their experiences.

Ramadan marks the best opportunity to assist the poor and we hope that Muslim communities will experience the collective benefit of social and inclusive confrontation against poverty.