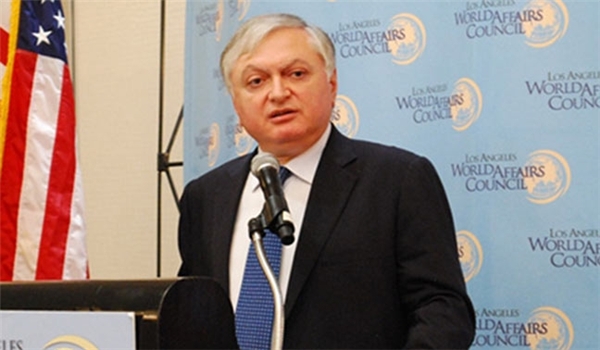 Armenia FM due in Iran for talks over visa waiver deal

Armenian Foreign Minister Edward Nalbandian plans to pay an official visit to Tehran to hold talks with senior Iranian officials on bilateral relations, particularly an agreement to ease the visa regime between the two countries.

Nalbandian will arrive in Tehran on Sunday for a two-day visit at the official invitation of Iranian Foreign Minister Mohammad Javad Zarif.

The latest regional and international developments are also on the agenda of discussions between the Iranian and Armenian authorities.

Nalbandian’s trip comes as the Armenian government on Thursday formally approved a draft on visa-free travel between Tehran and Yerevan.

A government statement said that the visa waiver “stems from the need to boost mutually beneficial commercial and other links between Armenia and Iran,” adding that it will create “more favorable conditions” for tourism.

The agreement will allow Iranians and Armenians to travel to the two countries with citizens and diplomatic passports without a visa and stay there for a maximum of 90 days within a 180-day period.