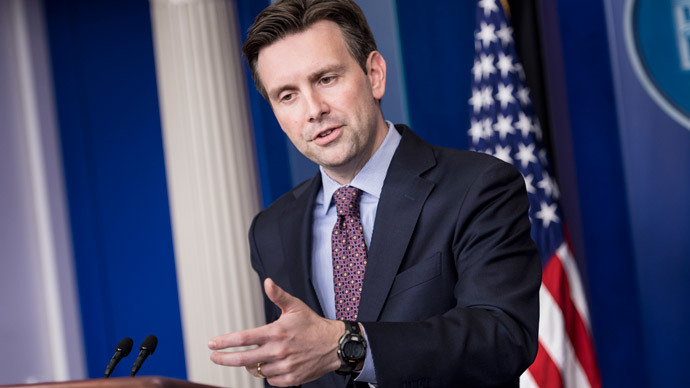 In the wake of the admission from the State Department that it intentionally edited and deleted video from an archived press briefing to hide statements it made about the nuclear negotiations with Iran, ABC News has found that the White House has recently omitted a line from a transcript of a May 9 briefing that also involved questions from Fox News about Iran.

Where the State Department deleted eight minutes of video from its website and YouTube page, the White House omitted part of an answer from press secretary Josh Earnest on its official transcript — without any footnote or reference to the fact that the change had been made.

The question from Fox News reporter Kevin Corke went like this, according to ABC News’ own recording of the briefing:

Corke: Can you state categorically that no senior official in this administration has ever lied publicly about any aspect of the Iran nuclear deal?”

However, the words “No, Kevin” never made it into the official White House transcript. Instead it picked up with the rest of Earnest’s response, comments about how the White House believes the deal has made America safer.

But, Earnest’s full answer can be heard in the White House’s own video, posted on its YouTube page, although it is not included in the on-screen captioning. The exchange occurs exactly one hour into the briefing.

It can also be heard in ABC’s own video.

A White House official told ABC News today that the line was not included because it was inaudible. Asked if the White House would update the transcript with Earnest actually said, this official said the White House “would only change the answer if there was an answer to change.”

In that same briefing, Corke later asked the question again, giving Earnest the opportunity to answer in a different way. Earnest said there was no evidence anyone had lied about the nuclear deal, a change from his original response.

When asked about the omission on the following day by ABC News, Earnest denied changing his answer. “If I had changed my answer, you’d know about it,” Earnest told ABC News’ Lana Zak in the daily press briefing. Today, the White House also referred us back to Earnest’s response of May 10.

The missing text in the transcript is noteworthy in the context of the State Department controversy, as it raises the question of whether or not there may be a deliberate pattern of altering the public record.

This week, State Department spokesman John Kirby admitted that an entire eight-minute section of a briefing from December 2013 had been removed from the department’s website and YouTube channel. That deleted portion also included questions from Fox News about the Iran nuclear negotiations.

Kirby said the State Department’s legal division investigated the incident and ultimately found it could not determine who made the decision to edit the video. They did find the person who edited the video, but that person and her supervisor, who discussed the matter before making the deletion, both told investigators they could not recall who instructed them to do it.

Chaffetz has asked for documents to identify the officials who made and received the request to delete the video footage, and anything related to the State Department’s internal investigation. Chaffetz’s letter also asked for any documents that might indicate this was not an isolated incident. The letter requested any internal documents and communications referring to prior requests to delete archived press briefing footage going back to Jan. 1, 2012.

“Whatever happened was both clumsy and stupid and inappropriate,” Reuters quoted John Kerry saying late today in Paris. Speaking to reporters in Paris Kerry was asked if he wanted people who tampered with the historical record working for him. “Of course not. I just said, it’s inappropriate.”

Asked yesterday if the order to edit the video might have come from the White House, State Department spokesman Mark Toner said that would be “a huge conclusion to jump to.”

Earnest also commented on the State Department edit, saying yesterday that “no one would make a decision like that in briefing I’m involved with without telling me.”