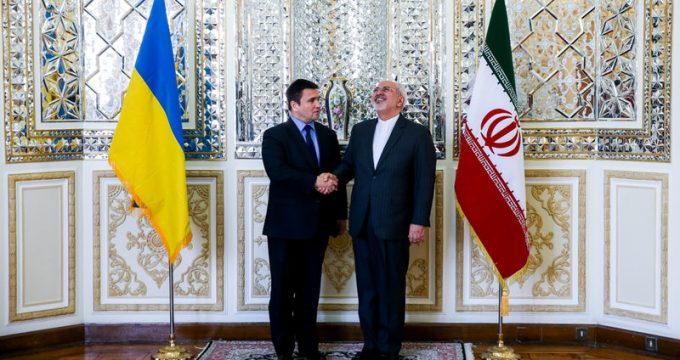 The Iranian foreign minister made the remarks in a meeting with his Ukrainian counterpart Pavlo Klimkin in Tehran on Sunday.

“By increasing the consultations between the Iranian and Ukrainian officials and facilitating issuance of visas for Iranian industrialists and businessmen, I hope the two countries could broaden their relations,” Zarif said, reminding vast capacities for Tehran-Kiev cooperation in different areas of higher education, science, technology, energy, power plants, renewable energies and agriculture.

The Iranian foreign minister said that the nuclear agreement between Tehran and the six world powers (the US, Russia, China, France, Britain and Germany) has paved the way for boosting economic and industrial cooperation between the two countries.

Klimkin, heading a high-ranking delegation, arrived in Tehran on Sunday morning on a two-day visit at the invitation of Zarif.

In late February, Ukrainian Ambassador in Tehran Sergei Buldiliak said his country is willing to enter into joint ventures with Iran in energy and aircraft manufacturing.

“We are willing to expand bilateral relations, specially in economy,” Buldiliak said in a meeting with Zarif in Tehran.

“Ukraine enjoys abundant capacities in energy, shipbuilding, airplane manufacturing, spare parts and machinery. We hope our bilateral cooperation will expand to these arenas as well,” he added.

During the meeting, Zarif referred to a recent meeting with his Ukrainian counterpart, and expressed the hope that bilateral relations would broaden in the economic, trade and cultural fields.