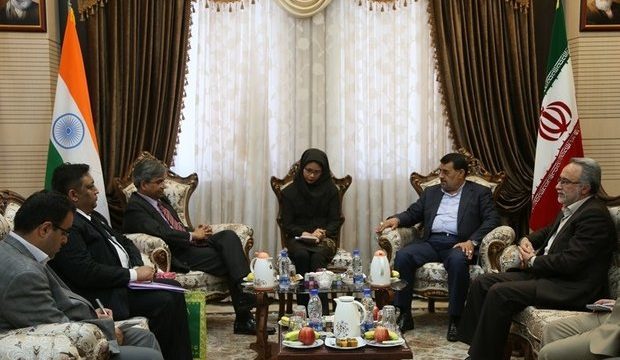 The Indian Ambassador made the remarks while addressing Governor of Hormozgan province Jasem Jaderi on Tuesday, on the occasion of the docking ofIndian flotilla of peace and friendship at Iran’s First Naval Zone.

Kumar highlighted the significance of Hormozgan province, particularly the port city of Bandar Abbas, due to the presence of Shahid Rajaee Port Complex which handles a major part of Iran’s exports and imports.

Noting the total satisfaction of Prime Minister Modi over his recent visit to Iran, Kumar added “constructive meetings were held with Iranian senior officials and the private sector, and a number of lucrative agreements, particularly in the fields of regional relations and energy, were signed between the two countries.”

“We are keenly interested in expanding cooperation with Iran in the area of transport corridors, beginning right in Hormozgan province,” he added, while expressing hope to see the import and export potentials of Bandar Abbas today.

The governor of Hormozgan, for his part, stressed that the province has a high capacity for improving Iran-India ties, adding “the country’s largest trade and economic port is Shahid Rajaee Port Complex which handles nearly 70 per cent of Iran’s imports and exports.”

“Hormozgan can connect India to Central Asia and Europe via the sea, and this will present a good opportunity for the two countries to boost up cooperation,” he added.