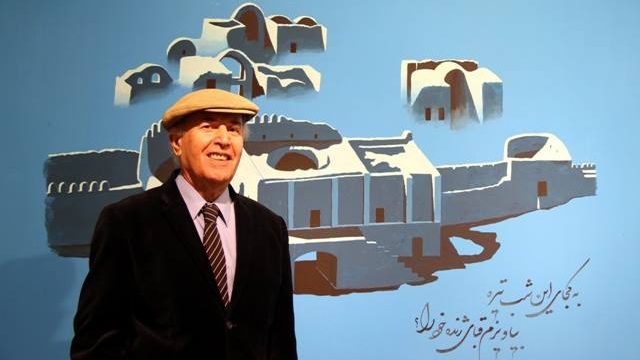 Veteran Iranian illustrator, author and artist, Parviz Kalantari, passed away on May 20, at the age of 85, after a lifetime of contribution to Iran’s culture and art.

He had been ill since a stroke in 2014, Honaronline reported.

Kalantari illustrated children’s book and worked as a textbook illustrator of Iranian school books for a while and was the creator of some of the most memorable illustrations for Iranians. As a diligent artist for more than six decades, he taught several generations of Iranians his styles and practices in painting and illustrations. His artworks have been exhibited in the UK and the US.

One of the features of his works is the use of indigenous art forms of the nomadic tribes of Iran. He incorporated the patterns that are woven into the Iranian traditional types of nomad carpets, ‘kilim’, ‘gabbeh’ and ‘chanteh,’ in his artworks.

By using a short story and simple illustrations inspired by the primitive art of Iranian nomads, Kalantari familiarized urban children with the lives of nomadic tribes who migrate with the change of seasons.

Furthermore, an illustration of his ‘Iranian City’ hangs in the UN-Habitat headquarters in Nairobi and another of his artworks has been printed as a UN postage stamp.

Kalantari was born in 1931 in Zanjan Province. He graduated in painting (1959) from the school of fine arts in Tehran University.

He was the first director of art education at the Institute for Intellectual Development of Children and Young Adults in Tehran from 1968-1978.
His will be laid to rest on May 23 at the special section for artists at Behesht-e-Zahra cemetery in southern Tehran.

Iranian art, Parviz Kalantari death May 24, 2016
Reasons of agreement, disagreement with Iraqi Kurdistan independence
Why did US seize Iran’s $2b?