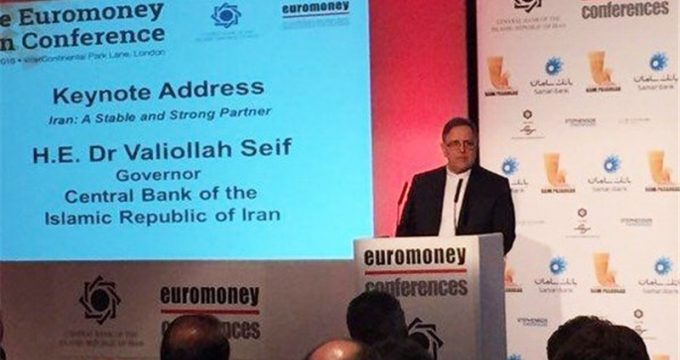 TEHRAN (Tasnim) – The governor of the Central Bank of Iran (CBI) said the global banks need “reassurances” that they will not be accused of breaching sanctions if they rekindle ties with the Islamic Republic despite a lasting nuclear deal between Tehran and world powers.

“Some movement and western officials have made some positive pronouncements, but banks need tangible reassurances that they would be immune from baseless allegations (of sanctions breaches),” Valiollah Seif told the Guardian in an interview published on Friday.

He made the remarks on the sidelines of the Euromoney Iran Conference in London. The aim of the one-day conference was to provide a platform for Iranian and international banks to discuss the necessary steps for Iran’s re-integration into the international financial community.

Seif further said that obstacles preventing Iranian banks from rekindling ties with the global financial system show that the US and the EU have failed to comply with their commitments under the nuclear deal, also known as the Joint Comprehensive Plan of Action (JCPOA).

“Banks need enough reassurances, even if this means rewriting guidelines or revising regulations, or giving banks written guarantees,” he said.

“Until our western interlocutors have fully fulfilled their obligations under the nuclear deal, we won’t see a real change in our banking relations.”

Elsewhere in his remarks, the top Iranian banker called on London to help Iranian banks resume their activities in the British capital.

“Our first expectation from Britain is to provide assistance so that our Iranian banks can start operating in London again,” he said.

Seif said Iran was unable to repay its debts to some of its foreign suppliers during the sanctions years because it did not have access to any payments channel, even though it had enough money.

Moreover, restriction on Iran’s access to the dollar system has created serious issues, Seif said, even in cases where no dollars are exchanged, he added.

“If we want to change Omani rials to euros, we don’t need dollars, but the system is designed in a way that it has to be changed to dollars first, then euros. They should find a way for us to resolve this issue.”

Seif further said that Inflation has declined from 45% in 2013 to around 8% recently, the foreign exchange market has stabilized, and some key reforms have been executed after the implementation of the JCPOA in January.

Tehran and the Group 5+1 (Russia, China, the US, Britain, France and Germany) on July 14, 2015 finalized a comprehensive deal on Tehran’s nuclear program and implemented it on January 16.

However, some Iranian officials have complained about the US failure to fully implement the accord.

Two months ago, Leader of the Islamic Revolution Ayatollah Seyed Ali Khamenei said Americans have yet to fulfill what they were supposed to do as per the nuclear deal.

Iran still has problems in its banking transactions or in restoring its frozen assets, because Western countries and those involved in such processes are afraid of Americans, Imam Khamenei said, criticizing the US for its moves to prevent Iran from taking advantage of the sanctions removal.