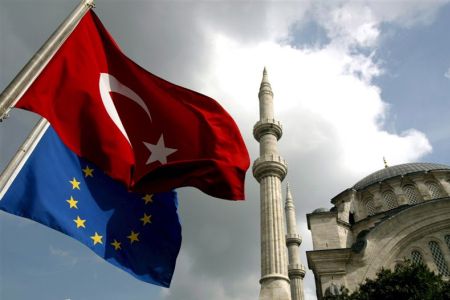 Sources in the European Union say it would be nearly impossible for the 28-nation body to meet an end-June deadline for granting Turkish citizens visa-free travels to Europe as disputes still remain between the two sides on how to go ahead with terms of a wide-ranging deal on refugees.

Sources familiar with negotiations between the EU and Turkey said Thursday that Ankara’s refusal to fulfill EU criteria for narrowing its anti-terror law has made a decision on visa-free travels for Turks to Schengen area almost impossible.

“De facto a decision in June ‘EU to miss Turkey visa deal deadline’is not possible anymore,” said the source, adding that members of the European Parliament could still theoretically vote on the plan at their final plenary session on July 4-7 although a more realistic scenario would be a vote after summer break.

EU Parliament President Martin Schulz had said earlier that he did not see a resolution on visa-free travels happening before the end of June.

Turkey has repeatedly said it will not heed calls by the EU for changing its counter-terror law in return for privileges promised in the refugee agreement which the two sides signed in March. The EU had vowed a series of incentives to Turkey as part of the mega deal which was aimed at curbing the unprecedented flow of refugees into the continent. Among them was providing Turkish citizens with visa-free travels to European countries.

However, another EU source endorsed the idea that visa-free travels could come in July but he said it could also happen in October, based on the Turks’ compliance with EU demands.

Another EU official with long experience of negotiating with Ankara tried to downgrade Turkey’s defiant rhetoric on the issue, saying, “We’ve been through this before … It’s not the first time there has been quite provocative talk from the Turkish side, then we sat down and found a way forward.”

Ibrahim Kalin, spokesman of Turkish President Recep Tayyip Erdogan, told a news conference on Wednesday that Turkey was doing everything it could to fulfill the criteria set by the refugee deal, but added that EU-demanded changes would encourage terrorist organizations.