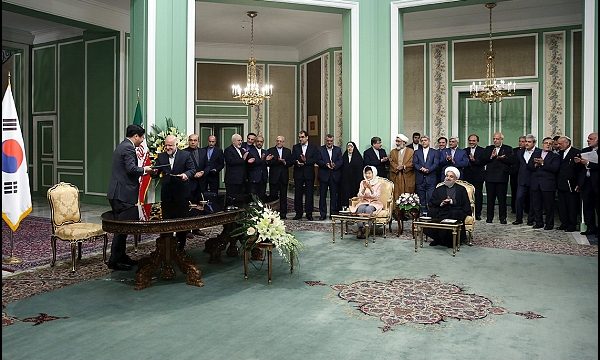 TEHRAN, May 03 (MNA) – South Korean president has announced the adoption of a financial support package worth $ 25 billion for infrastructure investment in Iran.

Speaking at the session of Iranian-South Korean economic activists on Tuesday morning, the visiting President of South Korea Park Geun-hye pointed to Iran’s intention to develop infrastructures in its 6th Development Plan saying “aiming to support the process of infrastructure expansion in Iran, South Korea has prepared a 25-billion-dollar support package hoping that Iranian entrepreneurs will take advantage of it.”

Pointing to the words of Hafez poems pertaining to friendship and comradeship between among nations, Geun-hye voiced optimism that Iranian and South Korean businessmen would make significant advancements in the new economic conditions.

The official deemed Iran as a rich country possessing proper grounds for investments on the part of South Korean economic activists; “continuous implementation of the signed Memoranda of Understanding (MoUs) could lead to economic development of the two countries.”

The South Korean president touched upon the newly-inked agreements in various fields including the ones between the two countries’ customs as well as between Iranian and Korean investors expressing hope that the exchange of information will lead to expansion of ties.

“Also the maritime transport cooperation agreement between the two sides will reduce the high transport costs alleviating the need to carry marine cargo through third-party countries,” she continued.

Park Geun-hye went on to reiterate “an Iranian desk will be launched in South Korea while we will set up a Korean desk at an Iranian bank to support the business and management issues; moreover, Iran plans to provide oil and gas industry infrastructure worth 185 billion dollars by the year 2020 in order to establish a giant holding in the field of energy.”

“The construction power of South Korea combined with the mobility of Iran will certainly produce desired and fruitful outcomes in railroad, airport and urban development,” highlighted the Korean president expressing hope that MoUs on cooperation in the field of infrastructure and water resources would mark a catalyst to strengthen ties.

“Furthermore, in modern times the relations between the two countries have always been based on friendship and trust,” she stressed.

The official emphasized that the existence of streets named after the two countries’ capitals remains one instance of trust and friendship between Iran and South Korea; “more than 230 Korean businessmen are accompanying me in the visit to Iran in order to pursue common success.”

“In 2011, bilateral trade between the two countries reached $ 17.4 billion, which unfortunately dropped to $ 6.1 billion in 2015 due to sanctions, but now business windows have been opened in the two countries,” Geun-hye concluded.