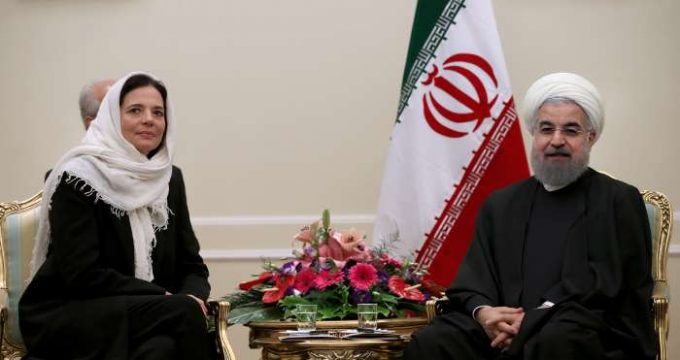 Rouhani made the remarks in a meeting Saturday with visiting President of Belgian Senate Christine Defraigne.

Referring to the positive role the EU played during the nuclear talks that led to July deal, Rouhani described the nuclear agreement as the start not the end of the way.

Pillars of the nuclear agreement will be strengthened only through well-timed implementation and fulfillment of the commitments, said the Iranian President.

The July agreement showed that the complicated questions around the world can be solved through dialogue, he said describing it as a model for solving other problems in world and region.

On Iran-Belgium relations, Rouhani said the opportunities created in the post sanctions era should be taken to develop bilateral cooperation in trade and economic fields.

There is no hindrance to widen Tehran-Brussels ties, said Rouhani, adding the two can plan for joint economic activities in the entire region.

About the issue of terrorism, Rouhani described it as a big global problem.

However, he said, bombardment and military attacks are not basic ways to fight against that phenomenon.

Unfortunately, he added, the EU started late facing terrorism when that phenomenon had made Afghanistan, Iraq and Syria involved.

Europe was indifferent to that issue, said the President, adding it started fighting terrorism just when it reached the European countries.

Terrorists’ access to chemical weapons is terrible, he said, while referring to Iran as a victim of use of those weapons during the imposed Iraq war on Iran in 1980-88.

He further urged all to make efforts to uproot terrorism all over the world.

For her part, the Belgian official said her country is willing to open new chapter in its relations with Iran.

Referring to Iran as a country that ensures security in the region, Defraigne appreciated Iran’s stance on fight with terrorism.

She said her country is ready to gain Iran’s experiences in that area.

She further officially invited the Iranian President to visit Belgium.