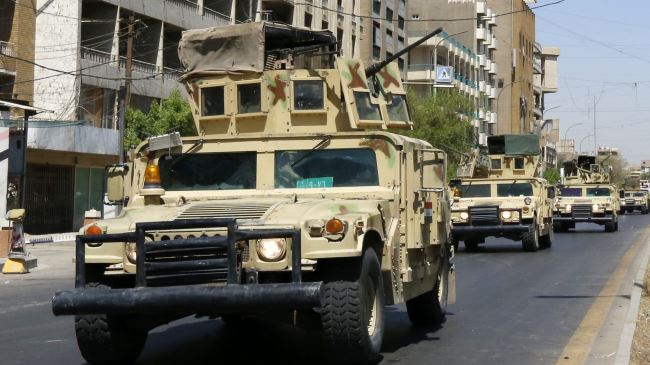 Alwaght- According to the Public Mobilization Forces of Iraq, a leading anti-terror popular force, since its establishment on June 2014 up to end of 2015 it has launched, through nine brigades, two major operations Labaik Ya Rasool Allah 1 and 2 against the terror group ISIS, liberating from the terror organization 19 cities and 51 villages as large as 175,000 square kilometers. The freed areas account for one third of the whole region held by ISIS in Iraq. These areas include two major Ajil and Alas oilfields north of Salahaddin province. ISIS used to produce 20,000 barrels out of its total 50,000 barrels daily oil production from these areas, making between $6 and $21 million per month with between $10 and $35 per barrel.

While the terror organization had cut off almost half of Iraq’s total oil income by seizing some oilfields, the popular forces in 2016 launched operation Imam Hadi in a 5000 square kilometers area in Salahaddin and Tharthar regions, recapturing major oilfields from ISIS. The area included 64 strategic regions and three Iraqi army’s huge ammunition dumps. As a result of recapture of the areas the popular forces have managed to cut the roads between Salaheddin and Nineveh as ISIS’ supply lines.

The disconnection of the two provinces heralded that the recapture operation of the ISIS-held Mosul province could start soon. The same feeling has come out of an online poll conducted by Public Mobilization Forces’ website as 66 percent of the participants believed that Mosul liberation operation would soon begin.

But the current problem is that the opponents of the Public Mobilization Forces have started efforts to isolate them and bar them from presence in battlefields following the successful operation Labbaik Ya Rasool Allah 1. Preventing their participation in the upcoming Mosul recapture assault is the opponents’ latest anti-Public Mobilization forces attempt.

On April 7, 2015, Atheel al-Nujaifi, the former governor of Mosul at the time of its fall to ISIS, said that the Iraqi Prime Minister Haider al-Abadi and Masoud Barzani, the president of the Iraqi Kurdish region, had guaranteed that no unit of the Public Mobilization Forces would take part in Nineveh province liberation battle. “Instead a new force comprised of the Kurdish Peshmerga forces, the tribal forces and local police would lead the anti-ISIS operation,” said al-Nujaifi. The same remarks were repeated by Osama al-Nujaifi, the Iraqi parliament’s speaker and the head of parliamentary bloc al-Mutahedoun on February 3, 2016. Earlier, al-Nujaifi had emphasized that the Public Mobilization Forces would not participate in Mosul recapture operation, calling the upcoming operation a “private battle” in which only the Peshmerga forces, the army and National Mobilization, a Sunni force, would get involved. Earlier, Karim Nouri, spokesman for Public Mobilization Forces had responded to such remarks which aimed at preventing the popular forces from participation in the intended recapture operation, saying that “Mosul is an Iraqi province and the Public Mobilization Forces would not seek anybody’s authorization to take part in the battle to liberate the province.” Nouri called the popular forces as the only force to determine the conditions of battlefield, asserting that Mosul liberation offensive could not take place before cleansing Al Anbar province the whole borders of which with Syria are major ISIS’ access roads.

The dispute over Public Mobilization Forces’ participation in Mosul liberation is a continuation of a scuffle that started since recapture of Ramadi in December 2015. After the popular forces pulled out of Tikrit, Ramadi, the capital of Al Anbar province, came under an attack of ISIS on April 28, 2015, and finally was seized by the terrorist organization on May 15, 2016. Al Anbar fell to ISIS after 3,000 of Sunni tribal fighters from Al Anbar received their arms but afterwards refused to take on the terrorists and so fled the battlefield. The Shiite members of Committee of Tribal Leaders in Iraq’s parliament claimed that a large number of the tribal forces took a neutral position on ISIS after the army forces fled the fronts. At the same time, the former US army’s Chairman of Joint Chiefs of Staff General Martin Dempsey has commented on the way Ramadi fell to ISIS, admitting that the Iraqi forces were not forced out of Ramadi, rather, they were pulled out of the city. He was referring to the videos showing the Iraqi army troops stationed in Ramadi fleeing the battlefield instead of fighting the terrorists. Acting as Special Forces, the Ramadi-based Iraqi troops fled the city so fast, leaving behind tanks, artillery, armored vehicles and Hammer military cars all provided to them by the US.

But finally on 17 May, 2015, the Iraqi PM al-Abadi officially announced that he, at the request of provincial council and tribal leaders, had asked the Public Mobilization Forces to enter Al Anbar to counter the terrorists of ISIS.

Established on March 24, 2016, Fatah Operation Room is supposed to operate as a command post for offensive on Mosul to take it back from ISIS. The assault would be launched from the eastern, northeastern, western, southern and southeastern sides of the province. At first front of the assault, the Peshmerga forces would be backed by 3000 of Sunni National Mobilization forces. Furthermore, the western front would host the Peshmerga forces, Al Nawader forces- from Shomar tribe-, the Kurdish Sinjar Protection Units and Turkmen forces. Also, in the southern and southwestern fronts, the 15th and 16th Brigades of Iraq’s army, 6000 of Nineveh police forces, a unit of rapid reaction forces beside counterterrorism forces, Regional Police and 3000 of Tribal Mobilization Forces, which is formed by southern Mosul’s tribes, would take part. All these forces would have air cover of the US-led coalition as well as the Iraqi air force. On the other side, it is expected that 7,000 ISIS’ local forces beside 3,000 foreign terrorist fighters inside Mosul and 6,900 local forces along with 600 foreign forces of ISIS would strengthen Mosul’s defense lines against attacks of the Iraqi forces. Based on the arrangements, there is no place predicted for Public Mobilization Forces in the decisive Mosul battle.

A couple of reasons stand behind efforts to distance Public Mobilization Forces from battlefields, including:

1. The Sunnis in general always harshly reacted to Public Mobilization Forces’ presence in their areas. They compare them with ISIS terror organization. The same case could happen also in Mosul should the popular forces want to take part in recapture battle. Different issues motivate Sunni groups’ opposition to presence of Public Mobilization Forces in Sunni-inhabited areas, including sectarian drives and attempting to seize full control of the region to establish a fully Sunni autonomous region.

2. Just like the Sunnis, government of Kurdistan region has always reacted to the Public Mobilization Forces’ getting close to its borders and the disputed areas. The result of such pessimism have been clashes in Iraq’s city of Tuz Khormato and a group known as Haider Shishoo in Sinjar with Public Mobilization units. Kurdistan region tries to allow Peshmerga forces exclusively recapture Mosul from ISIS so that in the future it uses the success as a trump card in Kirkuk case and then declaring independence. The Kurdish region would benefit from alliance with Al-Nujaifi family to realize its goals.

3. The US is highly concerned to see the Public Mobilization Forces, as a resistant group, gain powers in Iraq. Since 2015, Washington made efforts to prevent another version of Lebanon’s Hezbollah this time in Iraq. The US instruments for its aim are the Shiite nationalist and secular movements, some Najaf-based powerful groups as well as Kurdish and Sunni layers of Iraq’s political system.

4. The nationalist movements of Iraq, whose most prominent segment is the London-based al-Abadi-led Islamic Dawa Party, believe that Iraq should stay away from Iran’s influence and it should not be led by the groups which believe in the Guardianship of the Islamic Jurist, an Islamic leadership form based in Iran. Additionally, Al-Abadi’s political party believes that Iraq should not become a battlefield and pay the cost of a US-Iran rivalry in the region.

5. Should the Public Mobilization Forces are not absorbed as a key force in Mosul recapture operation, two ways would be ahead of Iraq’s government and the US-led coalition: First, fighting a lengthy battle with large-scale losses and unpredictable results and second holding possible negotiations with the terrorist group ISIS to convince it to move to Syria without any fight.