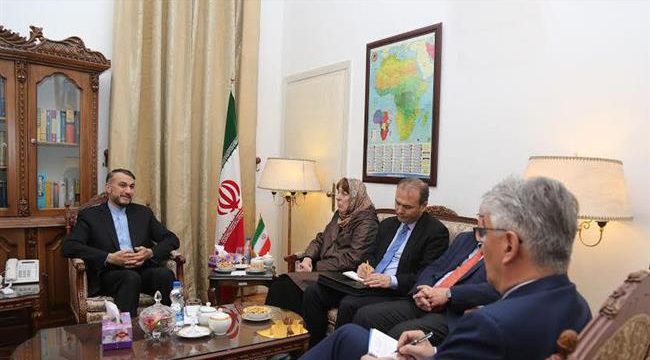 A senior Iranian diplomat has highlighted the Syrian government’s measures on disarmament of chemical weapons, saying Damascus has acted “responsibly” in this regard.

Hossein Amir-Abdollahian, who is Iran’s deputy foreign minister for Arab and African affairs, also deplored the employment of chemical weapons by Takfiri militant groups in Syria.

“While the Syrian government has acted responsibly on the issue of chemical disarmament, unfortunately the terrorist groups and militants in Syria continue to act irresponsibly and use toxic chemical gas,”Amir-Abdollahian said.

The Iranian official also criticized the international community for failing to take effective measures against the use of such arms.

He made the remarks in a meeting with Virginia Gamba, senior United Nations disarmament official who leads a joint investigation by the UN and the Organization for the Prohibition of Chemical Weapons (OPCW) on chemical attacks in Syria.

In March, the Syrian-American Medical Society published a report detailing 161 attacks involving “poisonous or asphyxiating agents, such as sarin, chlorine, and mustard gas” since the beginning of the Syrian conflict in 2011. At least 1,491 people were killed in the chemical attacks, according to the report.

Earlier this month, Daesh carried out a chemical attack on a Syrian military airport in east of the Arab country, Syria’s Ikhbariyah television station said.

The report said that the terrorists fired rockets carrying mustard gas which targeted the airbase in the south of Dayr al-Zawr city.

Back in March, local Iraqi governor Najmuddin Kareem told Reuters that the Takfiri group had used “poisonous substances” during an attack on the village of Taza, in northern Iraq. More than 40 people suffered from partial chocking and skin irritation after the attack.

Elsewhere in his remarks, Amir-Abdollahian also expressed Iran’s readiness to contribute to the joint UN-OPCW inquiry on the use of chemical weapons in Syria.

Describing Iran as a big victim of chemical weapons, the Iranian official voiced the Islamic Republic’s opposition to all types of weapons of mass destruction, including chemical arms.

Amir-Abdollahian also called Israel, which possesses arsenals of atomic and chemical weapons, the main threat to the region.

The UN official, for her part, called on all UN member states, including Iran, to help the UN-OPCW mission.

Gamba also praised Iran’s “constructive” efforts aimed at helping the resolution of the conflict in Syria and commended Tehran’s fight against terrorism.

Syria has already disabled all chemical weapons sites in October 2013, but it needs to raze the structures that encompass the facilities as well.