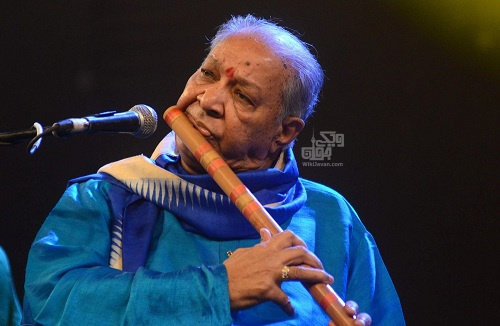 TEHRAN, Apr. 19 (MNA) – The Indian classical flutist Hariprasad Chaurasia will be giving a concert in Tehran’s Vahdat Hall on April 23.

Expressing happiness over the performance of Indian music legend in Tehran, he underlined that the officials of the two countries must boost and deepen bilateral relations.

“Hariprasad Chaurasia is one of the greatest flutists in India who plays in the North Indian tradition; his performance will be a beginning for future programs,” said the ambassador.

Pointing to the recent visit of Indian Foreign Minister Sushma Swaraj to Iran, the envoy added that useful talks have been made and the concert will be the beginning of bilateral cultural relations.

Director of the Rudaki Foundation Bahram Jamali, also attending the conference, said that the foundation has planned a variety of programs with countries having commonalities with Iran.

Jamali also added that the foundation is willing to dedicate one day a year to India on the calendar of events at Vahdat Hall.