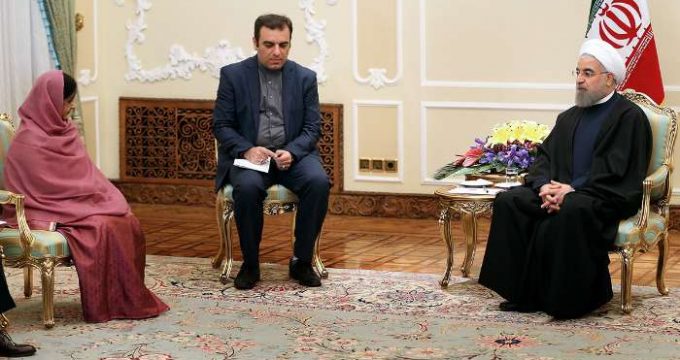 President Rouhani received Indian Foreign Minister Ms. Sushma Swaraj on Sunday evening in Tehran. Ms. Swaraj is visiting Tehran to discuss bilateral matters of interest. Rouhani pointed to both countries’ historical ties and long history of political and trade relations and said that ties would provide both countries with benefits; “Iran welcomes cooperation with India in all fields of interest and indeed there is enough opportunity and ground to attain a good level of relations,” Mr. Rouhani believed. “Exchanges of diplomats and high-profile officials will contribute to expansion of Tehran-Delhi ties; Iran’s economy would act as complementary to Indian economy; Indian’s fast-growing economy of services and technology products would enjoy Iran’s ample energy sources and you would rely safely on our oil and gas as a trusted source of energy.”

“Iran and India have experienced considerable progress in science and technology which would be the next priority for cooperation,” Rouhani added.

He also hoped that in next meetings with Indian officials, bilateral and regional issues especially terrorism would provide topics for discussion.

Ms. Swaraj, for her part, said that a long and strong historical ties between two nations would help extend ties in all fields; “India also welcomes improved ties with Iran; as a new and emergent economy, India needs huge source of energy and will seek a relationship with Iran where both sides would benefit in a game which would be win-win for both sides,” she told Rouhani. “Our relations should go beyond mere economy and should embrace other issues including culture and technology.”

“Iran is a country of diverse investment opportunities and India would use Iran’s Chabahar port city to link to Central Asia and Caucasia through north corridor to find new markets for its products,” Ms. Swaraj concluded.