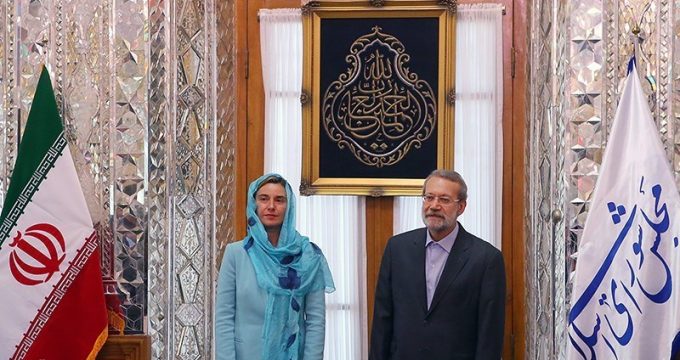 “Now is the time to see the effect of the nuclear deal on (Iran’s) economic relations,” Larijani said in a meeting with visiting EU Foreign Policy Chief Federica Mogherini in Tehran on Saturday evening.

Because one of the main concerns of the Iranian businessmen and industrialists is how to carry out banking transactions with other countries, as banking problems are hampering the transactions, he said.

The Iranian parliament speaker went on to say that the issue should be resolved as soon as possible.

He further expressed the hope that Mogherini’s visit to the Islamic Republic would lead to a tangible effect of the nuclear deal on Iran’s economy.

Mogherini, for her part, said the large delegation, which accompanies her in the ongoing trip to Iran, is indicative of the fact that Europe is willing to further boost its cooperation with Iran.

The remarks come against the backdrop of a new wave of interest in ties with Iran after Tehran and the Group 5+1 (Russia, China, the US, Britain, France and Germany) on July 14, 2015 reached a conclusion over the text of a comprehensive 159-page deal on Tehran’s nuclear program and started implementing it on January 16.

The comprehensive nuclear agreement terminated all nuclear-related sanctions imposed on Iran after coming into force.