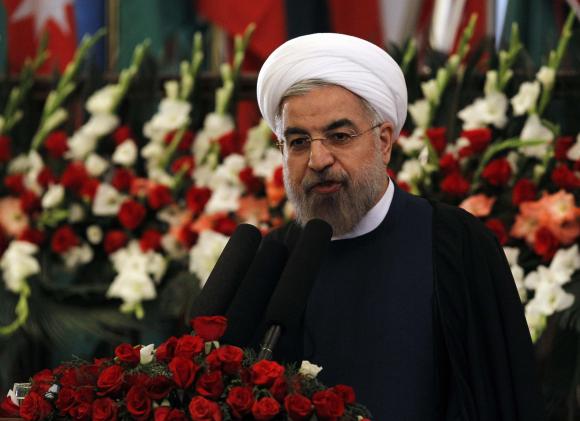 Iranian President Hassan Rouhani in a military parade on Sunday highlighted the necessity for paying equal attention to both diplomacy and Armed Forces in national doctrine, saying that the country needs both of them at the same time.

“Our diplomacy and Armed Forces pursue the same goal: national security, national might, stability, and development in the country,” Rouhani said in an address to the Iranian Army’s military parade in Tehran held on the occasion of Iran’s National Army Day.

“We have the book, logic, prudence, and rationality in one hand, and the sword in the other hand, and we see these two beside each other,” the Iranian president noted.

“If the Armed Forces serve to counter any aggression on our national interests, our diplomacy also aims to safeguard the Iranian nation’s rights in the arena of negotiation,” he added, stressing that the country needs soft power and hard power together.

President Rouhani said Iran’s objective in the recent nuclear negotiations was to maintain and reinforce Iran’s military might, adding, “Those who say we do not need hard power are naïve people, and those who reject the need for soft power have a short-sighted view.”

He also referred to his recent remarks at the Organization of Islamic Cooperation (OIC) Summit held in Turkey’s Istanbul earlier this week, saying, “There I clearly stated that the Islamic Republic of Iran’s military, political, and economic might is not (aimed at being used) against its neighbors and the Muslim world’s countries.”