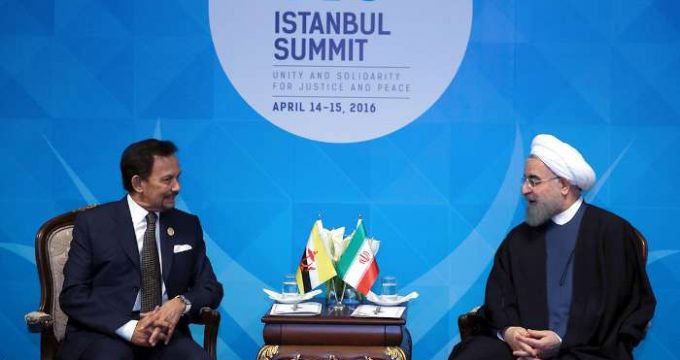 Istanbul, April 15, IRNA – President Hassan Rouhani said on Friday that Iran is willing to develop ties and cooperation with Brunei and hold regular consultations about bilateral and regional issues.

He made the remarks in a meeting with Sultan of Brunei Haji Hassanal Bolkiah on the sidelines of the 13th Summit of Leaders of the Organization of Islamic Cooperation (OIC) in Istanbul.

President Rouhani said that good and friendly relations between the two countries make up for a base for development of all-out ties.

The 2-day summit meeting of OIC kicked off on Thursday with slogan of ‘Unity and solidarity for justice and peace’.

President Rouhani said that Tehran, Bandar Seri-Begawan may have good cooperation in the field of engineering and technical services, energy and petrochemical industry, settlement of regional and international issues, including campaign against extremism.

‘Today, extremism and terrorism are common challenge for all Islamic states,’ Bolkiah said that, adding that in the international campaign against the two ominous phenomenons, all Islamic countries should exercise cooperation and present the real face of Islam to the world.