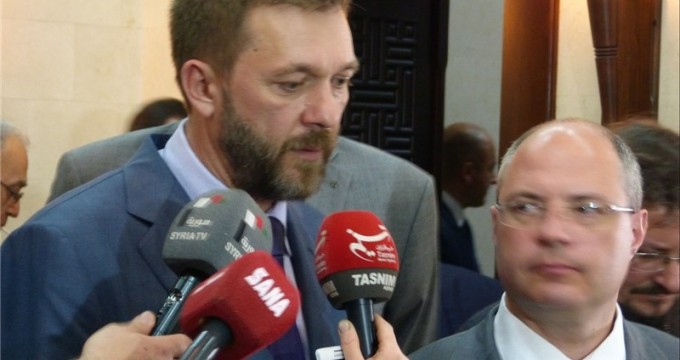 TEHRAN (Tasnim) – A Russian parliamentary delegation tasked with monitoring the forthcoming Syrian elections has arrived in the Arab country, a Russian lawmaker said.

The Russian delegation will supervise the Syrian parliamentary votes scheduled to be held on April 13, Alexander Yushchenko, a member of the delegation, told the Tasnim News Agency on Monday.

He further said that there is a “dynamism” seen in the political platform of the war-stricken Arab country.

Yushchenko also took a swipe at some opposition groups outside the country that are questioning the legitimacy of the elections, and emphasized that the elections will be held “in accordance with Syria’s constitution”.

Elsewhere in his remarks, the Russian MP said providing humanitarian aid to the beleaguered people of Syria is also among the objectives of the visit by the Russian lawmakers.

Syrian President Bashar al-Assad has set April 13 as the date for the elections. The polls will be held at the usual time as the Syrian government holds such elections every four years.

The last parliamentary elections were held in 2012, just months after the adoption of a new constitution in the crisis-ridden country.

Syrian candidates have started their campaigns for Wednesday polls planned to be held amid an ongoing war against terrorism throughout the Arab country, which has been gripped with a catastrophic civil war since 2011.

According to a February report by the Syrian Center for Policy Research, the conflict in Syria has claimed the lives of over 470,000 people in total.