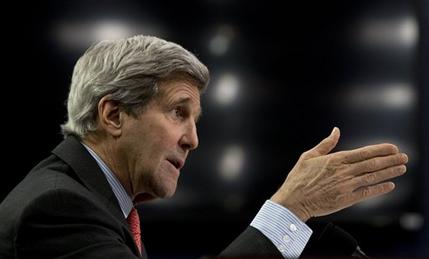 US secretary of state in Bahrain amid protest calls

US Secretary of State John Kerry has arrived in Bahrain amid calls for protest against his visit to the Persian Gulf Arab country.

He was scheduled to discuss regional issues, including the conflicts in Syria and Yemen as well as the fight against the Daesh terrorist group, during meetings with officials from the six countries making up the Persian Gulf Cooperation Council (GCC).

The visit comes ahead of a planned GCC summit in Saudi Arabia later in April which US President Barack Obama is set to attend.

Prior to Kerry’s visit, Bahraini opposition movements called on the people to stage a mass rally in Manama to voice their anger at the US role in the suppression of Bahrainis.

During a joint press conference with his Bahraini counterpart in Manama, Kerry said it is “essential” for Bahrain to respect human rights.

“Here, as in all nations, we believe that respect for human rights and an inclusive political system are essential,” Kerry said.

Bahrain has been widely criticized for its crackdown on dissent. Anti-regime protesters have been holding rallies across Bahrain since 2011, calling for the Al Khalifah family to relinquish power.

Scores of people have been killed and hundreds of others injured or arrested in the ongoing heavy-handed crackdown on the rallies.

In the latest protests, demonstrators took to the streets in the town of Shahrakan, located on the outskirts of Manama, on Tuesday to condemn the killing of Ali Abdulghani, who died of his wounds in a hospital in the capital four days after he was reportedly overrun by a police vehicle.

Amnesty International and other rights groups have repeatedly censured the Bahraini regime over the “rampant” human rights abuses against opposition activists and anti-regime protesters.

Bahrain, a key US ally in the Middle East, hosts the Fifth Fleet of the US Navy.

Political analysts believe trips by US officials to the Middle East region are also aimed at promoting the Iranophobia campaign and taking advantage of the insecurity in the region to increase US arms exports to the Arab monarchies of the Persian Gulf.

According to a study published in February by the Stockholm International Peace Research Institute (SIPRI), the volume of international transfers of major weapons, including sales and donations, was 14 percent higher in 2011-2015 than over the five previous years, with the US doing most of the exporting by selling weapons to more than 90 countries.

Saudi Arabia and the United Arab Emirates (UAE) were among the top four importers.

The report also pointed to the Saudi-led war on Yemen, where Saudi Arabia has been seeking to reinstate the country’s former President Abd Rabbuh Mansur Hadi and undermine the Yemeni Ansarullah movement.

“A coalition of Arab states is putting mainly US- and European-sourced advanced arms into use in Yemen,” senior SIPRI researcher Pieter Wezeman said in the report.

Substantial US weapons exports to the Persian Gulf littoral states come as Washington has recently expressed its opposition to the sales of Russian Sukhoi Su-30 fighter jets to Iran.

On Tuesday, the US Department of State Undersecretary for Political Affairs Thomas Shannon said Washington would use its veto power in the Security Council to block the possible sales of the fighter jets to Iran, claiming that such sales are prohibited under United Nation Security Council Resolution 2231.

Resolution 2231, adopted by the Security Council on July 20, 2015, endorsed a nuclear agreement between Iran and the P5+1 group, comprising Russia, China, France, Britain, the US and Germany.

In response to Shannon’s remarks, the head of the Russian Foreign Ministry’s department for non-proliferation and arms control, Mikhail Ulyanov, dismissed his claim, saying, “Such deliveries are not prohibited, they are allowed, and this follows from the text of the resolution.”

Iran and the P5+1 finalized the nuclear agreement, dubbed the Joint Comprehensive Plan of Action (JCPOA) in Vienna, Austria, in July last year. They started to implement the JCPOA on January 16, 2016.