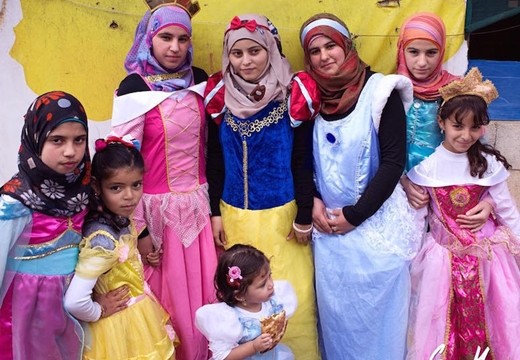 Syrian refugee girls talk of their future hopes and dreams while wearing fairytale costumes, then go in front of the camera.

Fahimeh Hassanmiri: One result of the recent war in Syria has been that 4.6m Syrians have become homeless, and have been forced to don the clothes of the migrant. In addition to all the political activities of various organizations, some caring artists and NGOs have taken steps to highlight the pain and suffering of the Syrian population in comparison with the experiences of many unconcerned people around the world. One of these projects is called Once Upon A War, has taken place in a Syrian refugee camp in Lebanon, as part of which Syrian girls posed in front of the camera.

Perhaps the difficult life situations faced by these girls have never allowed them to imagine themselves as little Walt Disney princesses, such as Cinderella, Snow White or Sleeping Beauty. They probably haven’t felt that they could be considered as heroes. The photography project’s designer went to them to make sure that, even if they can’t remove the shadow of war from their lives, at least they can have this wish come true.

The creators of Once Upon A War made their way to the refugee camp, and chose a certain day when these girls could celebrate wearing the costumes of their favourite characters, and be captured in photos while talking about their hopes and dreams.

However, the fact remains that these little girls are real-life heroes; heroes who have been forced by war to leave school, to marry and get pregnant at young ages, and who have undergone various forms of physical, mental and sexual discrimination and abuse.

These little girls are real-life heroes

Aya is 6, and loves posing for the camera. Every time she put on a new costume, she said, “No-one has ever photographed me before.” Aya’s favourite story is Beauty and the Beast, and she hopes to become an actress one day.

Manar and Wouroud are both 20 years old, and they are responsible for teaching the young children. They met in the camp 2 years ago, and since then have been inseparable. As they put it, their friendship is the only good thing that the war has brought them. Sleeping Beauty was the first fairytale Manar ever read, and it remains her favourite. Her dream is to become a doctor. Wouroud, however, loves Snow White’s kindness and peace. She is fascinated with other cultures, and her dream is to become a sociologist.

Bayan, aged 12, chose the Sleeping Beauty dress because it reminded her of a similar dress she once owned. When she and her family left their home 3 years ago, they had to leave everything behind, including her pink dress.

Raghad, also 12, loves Frozen, the story of two sisters, because she loves her own sister and would do anything for her, just like the character in the film.

11-year-old Mona has two favourite princesses – Jasmine and Belle. Both are strong and adventurous, and she wants to be a strong woman in future to fight against the difficulties of life.

These three all share the same dream, to become teachers.

Cinderella is 16-year-old Maram’s choice, because she is a dreamer. She believes in a brighter tomorrow. When we talked about the war, she managed to remember only the good parts out of this tragic experience. Maram loves kids and she takes care of most of the children at the camp. Her dream is to become a children’s nurse.

She believes in a brighter tomorrow

Hiba is only 2, and was born in Lebanon. She has never been to Syria – the camp is the only life she has ever known. She has not seen the film Cinderella, but heard the story from others. When she was shown the costumes, she chose the Cinderella dress out of all the others. Hopefully, this will be the start of better days for her.

This article was translated by IFP from Khabar Online News Agency.