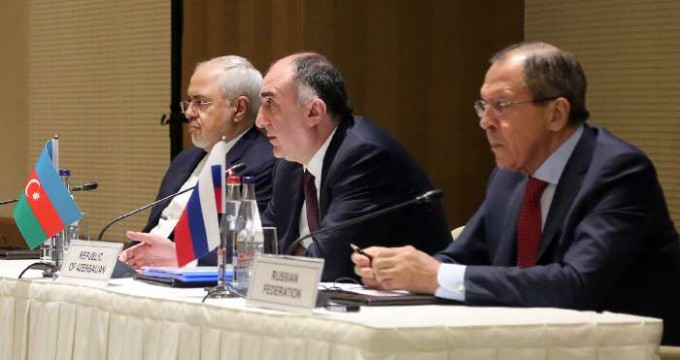 Tehran, April 7, IRNA – First trilateral meeting of Iran, Russia and Azerbaijan Republic attended by foreign Minister Mohammad Javad Zarif, his Russian and Azeri counterparts was held in Baku on Thursday with an emphasis on boosting cooperation among the countries.

During the meeting, delegations from the three states discussed avenues for promoting bilateral and trilateral ties as well as regional developments.

Expressing pleasure over the ceasefire between Azerbaijan Republic and Armenia, Zarif hoped that the dispute will be solved through peaceful means.

He also underlined the significance of promoting trilateral cooperation in the fields of railway, transportation and communications, fighting terrorism, banking and dialogue among religions.

Russian and Azeri foreign ministers Sergey Lavrov and Elmar Mammadyarov also voiced their readiness for cooperation in the arenas of fighting cooperation, north-south corridor, tourism and transportation which they described as among the major areas of collaboration.

Zarif arrived in Baku on Wednesday to attend the one-day first trilateral meeting with his Russian and Azeri counterparts.