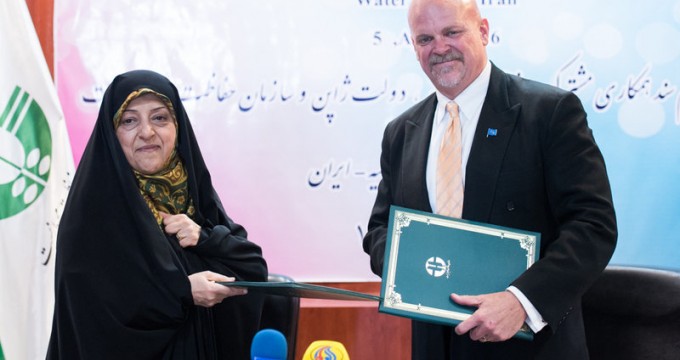 Tehran, April 5, IRNA – United Nations Resident Coordinator in Iran Gary Lewis said that one of the main UN and UN Development Program’s priorities in 2016 and 2017 is cooperation with Iran in the field of environment.

Addressing the signing ceremony of the third phase of cooperation document of the UN, Japan and Department of Environment on Urumieh Lake on Tuesday, he said that the UN has identified five areas of cooperation with Iran in the field.

Water, soil degradation, promoting energy saving and efficiency, for achieving low-carbon economy, air pollution and biodiversity are the areas of cooperation, he said.

Referring to the Urumieh Lake’s situation, he said that the lake is of national and international significance which is currently facing a terrible situation, a risk to public livelihood and health.

The UN envoy also said that the main reason behind drying of the lake is damming the waters feeding the lake with the aim of securing public livelihood.

Overusing the resources brought about the major problem of the lake’s drying, he said, noting, ‘We ourselves have created the problems and we ourselves should solve it.’

UN has launched the project of sustainable agriculture in cooperation with Iran and Japan in Urumieh Lake’s catchment basin.

The project aimed at cutting water consumption and controlling the lake’s pollution is currently in its third year and will continue, he said.