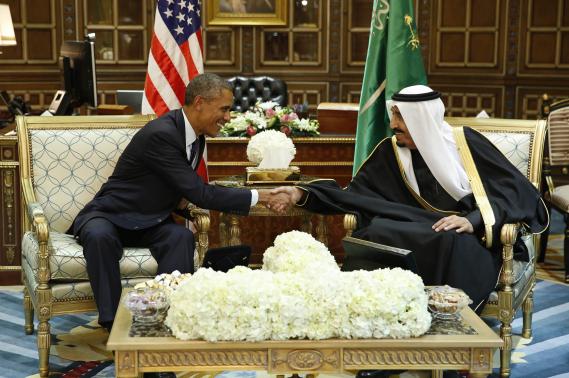 The billionaire businessman told a campaign rally in Racine, Wisconsin, on Saturday that the United States should be reimbursed by the countries it provides protection, especially those with vast resources such as Saudi Arabia, a top oil exporter.

“We take care of Saudi Arabia. Now nobody’s going to mess with Saudi Arabia because we’re watching them,” he said.

“They’re not paying us a fair price. We’re losing our shirt,” he said.

Trump had earlier suggested that the United States should consider ditching Riyadh because Washington is increasingly getting less dependent on the Saudi Arabian oil.

“The primary reason we are with Saudi Arabia is because we need the oil,” Trump said in an interview last year. “Now, we don’t need the oil so much.”

“And, if we let our people really go, we wouldn’t need the oil at all,” Trump said of US energy industry. “And we could let everybody else fight it out.”

“Look, Saudi Arabia is going to be in big trouble pretty soon,” the billionaire businessman predicted. “And they’re going to need help.”

On Friday, Trump said, if elected president, he would consider stopping American oil purchases from Saudi Arabia unless the Saudi government provide troops to fight the Daesh (ISIL) terrorist group.

“And yet, without us, Saudi Arabia wouldn’t exist for very long,” Trump said during a lengthy foreign policy interview published by the New York Times on Saturday.

“We’re not being reimbursed for the kind of tremendous service that we’re performing by protecting various countries. Now Saudi Arabia’s one of them,” he added.

The billionaire businessman told the Times he was willing to rethink traditional US alliances should he become president.

Elsewhere in his remarks, Trump accused US allies in the North Atlantic Treaty Organization (NATO) of “not paying their fair share” and called the 28-nation alliance “obsolete.”

In an interview with Press TV on Friday, James Jatras, former US Senate policy adviser and diplomat, said NATO has no justification for its existence because there is no immediate threat to the US and Europe.

“There is no power, there is no threat against which these countries need deterrence,” said Jatras, who is also a specialist in international relations and legislative politics in Washington.

“This is simply another failed justification for the role of NATO which frankly should have gone out of business after the end of the Cold War,” he told Press TV, after a top US general said America and NATO are switching their military doctrine from assurance to deterrence in Eastern Europe over Russia’s behavior.

“It is an example of how bureaucracies try to justify their existence long past when such justifications were valid,” Jatras added.