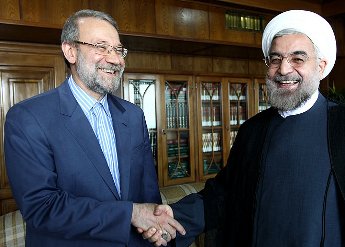 Majlis Speaker Ali Larijani supported President Hassan Rouhani’s decision to postpone his state visit to Austria due to security reasons.
“When an inviting country does not consider all of the security concerns, then the guest needs to make the right decision. Our president did so,” he said.
According to Larijani’s remarks, the reason for canceling the plan was rally planned by the anti-Iran terrorist group, Mojahedin-e Khalq Organization, which was to be held during President Rouhani’s visit to the European country.

Larijani noted that the Austrian government declined the request of the Iranian president’s security team for cancelling the permission granted for MKO’s rally, ISNA reported.
The top lawmaker criticized the media that merely reflected the Austrian president’s statements about lack of any “security problem” regarding the trip.

“Maybe the Austrian president meant their country is secure from Daesh [an Arabic acronym for the self-styled Islamic State militant group], but the issue was covered differently by domestic media and negatively affected the public mind,” he said.

Last Tuesday, the official website of the president stated that President Rouhani’s visit to Austria, which was scheduled for March 30-31, has been postponed.
According to this short notice, the decision was made due to “security reasons”, stating that “further arrangements” need to be made.

“Of course, it goes without saying that each state must make its own decisions about security and the head of state’s security,” Austrian President Heinz Fischer’s office said in a statement cited by Reuters. “The quality of relations with Iran will not be affected by this postponement.”