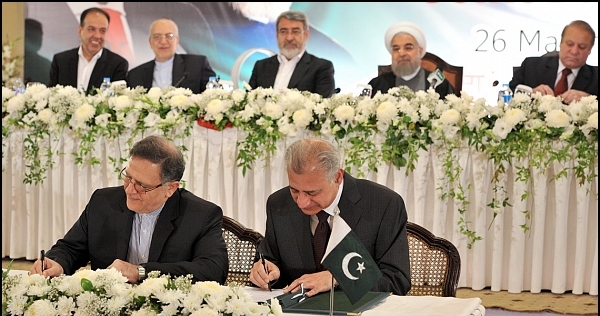 Speaking Saturday in a joint meeting of Iranian and Pakistani businessmen in Islamabad, which was also attended by Pakistani Prime Minister Nawaz Sharif, Rouhani said the Islamic Republic is ready to raise the volume of annual trade between the two countries from the current $1 billion to $5 billion.

He added that the two sides’ private and public sectors and entrepreneurs can play an important role in this regard.

He said Iran can be a reliable partner for Pakistan and help the country in such fields as gas, electricity, and oil as well as development of infrastructures like railroads and dams.

The president stressed that in the post-JCPOA and post-sanctions era, in which Iran will play its role in the region as an emerging economy, the country attaches special importance to ties with its neighbors, including Pakistan.

He was referring to the Joint Comprehensive Plan of Action (JCPOA), a comprehensive nuclear deal Tehran and the Group 5+1 (Russia, China, the US, Britain, France and Germany) reached in July 2015 and implemented on January 16.

“Iran considers Pakistan’s security and economic development as its own and will spare no effort in this regard,” the president went on to say.

Heading a high-ranking delegation, including 60 Iranian businessmen, Rouhani arrived in Islamabad on Friday at the invitation of his Pakistani counterpart Mamnoon Hussain and Nawaz Sharif.

President Rouhani’s two-day trip to Pakistan is aimed at discussing ways to further strengthen trade and economic relations and holding consultation with senior Pakistani officials on the latest developments in the region.