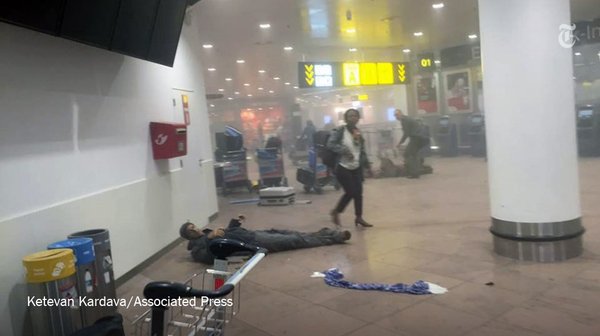 Brussels (AFP) – Belgian police issued a wanted notice for a suspect in the bomb attack on Brussels airport on Tuesday in which at least 14 people were killed.

A CCTV picture of the suspect shows a bespectacled man with a goatee beard, wearing a white jacket and black hat, and pushing a trolley with a large black bag.

Authorities earlier released a grainy picture of the same man alongside two men with dark hair who were also pushing trollies with similar bags.

Both of those men wore black gloves on their left hands.

Belgian officials said there were two bomb blasts in the main airport hall on Tuesday morning, at least one of which was a suicide bombing.

A third bomb that failed to explode was found later, a regional governor said.

“Three bombs were brought into the building, of which one failed to explode,” Lodewijk De Witte, the governor of Flemish Brabant province, told a press conference at the airport.

He said it was later destroyed in a controlled explosion.