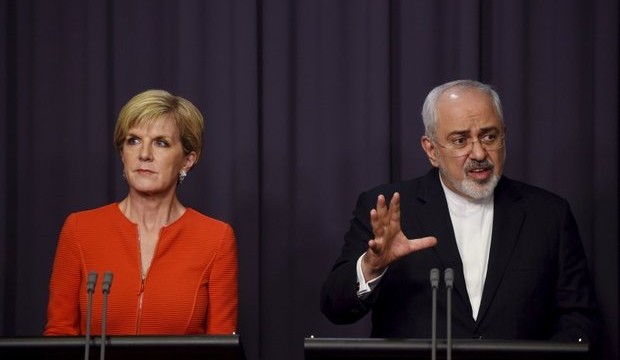 Following a meeting and a luncheon with Australian Foreign Minister Julie Bishop in Canberra on Monday, Iranian FM Mohammad Javad Zarif joined her in a press conference and answered the media questions.

Zarif maintained that the topics of discussion with his Australian counterpart revolved around expansion of relations between the two countries in the areas of trade, investment, technology and economy, adding other issues such as fight against violence, extremism and organized crimes also came up during the meeting.

“Iran and Australia share common views on fighting terrorism in Syria and Yemen and we should cooperate with one another in countering ISIL,” said Zarif.

The Iranian top diplomat said the Islamic Republic is constantly questioned about its military programs despite the fact that Iran’s military doctrine is strictly ‘defensive’.

“We are not at war with any countries and if any form of confrontation occurs, we will respond by defending our sovereignty,” said Zarif, adding Iran’s military programs are not illegal and do not even fall within the purview of 2231 and the nuclear agreement.

“Iran will never use any means to attack any country, including our missiles. These are only for our defense. I challenge those who are complaining about Iran’s missile program … to make the same statement,” he added.

Zarif then touched upon the issue of human rights, saying “human rights are today used as a political instrument. But Iran is the only country in the region that holds elections and the human rights status in Iran is actually improving.”

About Iranian immigrants in Australia he said, “the expulsion of illegal immigrants is a decision that the Australian government can make and it has nothing to do with Iran. If Australia decides to take a decision on this issue, it is up to the immigrants to return to their own country or not.”

In return, Julie Bishop extended her congratulations on the upcoming Iranian New Year, the recent twin elections in Iran and the country’s successful negotiations with the 5+1 that resulted in a historic nuclear deal and came into effect this January.

She said Australia has recently lifted its sanctions against Iran, adding expansion of trade and economic ties with Tehran was one of key topics of discussion between the two sides.

She also maintained that she had held ‘good talks’ with Zarif on issues related to Saudi Arabia and Yemen.

Javad Zarif is the most senior Iranian official to have visited Australia in ten years. His visit aims at conferring with Australian senior officials on various ways for expanding relations with the Asia-Pacific country following the implementation of the nuclear deal and the removal of sanctions against Tehran by Canberra.