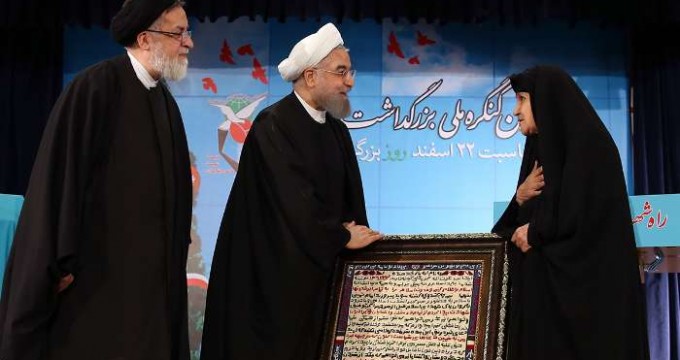 TEHRAN, Mar. 12 (MNA) – President Hassan Rouhani reaffirmed that Holy Shrines are the redlines of the Islamic Republic and any attack by terrorists would be responded severely.President Hassan Rouhani attended the third National Congress to commemorate Martyr’s Day held in the Al-Ghadir Hall of Foreign Ministry on Saturday morning.

Addressing the families of martyrs, President Rouhani noted the history of martyrdom in Islam and underlined that the way to immortality passes through sacrifice and martyrdom is the sacrifice and devotion on path of God.

“Martyrs are immortal as they have devoted their life in path of God,” reiterated Rouhani, adding, “martyrs are the social resources of Islamic Republic and all of us have to learn from them and their families.”

Rouhani said “martyrs taught us how to sacrifice, how to walk in path of Islam and how to be the prideful country of the region and the world.”

Given the regional issues and crises in Syria and Iraq, President Rouhani reaffirmed that Holy Shrines are the Islamic Republic’s redlines and any attack by terrorists would not be tolerated.