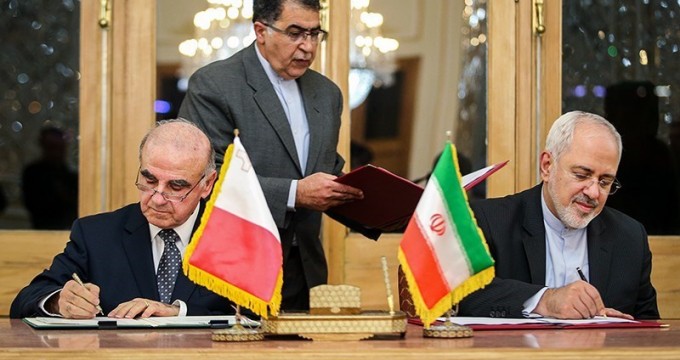 TEHRAN (Tasnim) – Iranian Foreign Minister Mohammad Javad Zarif and his Maltese counterpart George Vella announced the two countries have inked a couple of Memoranda of Understanding (MoUs) during a meeting held on Saturday.

One of the documents is focused on political consultations between the Iranian and Maltese foreign ministries, Zarif said during a joint press conference with Vella here in Tehran on Saturday afternoon.

The other MoU, he added, is concerned with the mutual lifting of visa requirements for political and diplomatic passports between the two sides.

During the press conference, Zarif hailed the forty-year-long ties between Tehran and Valletta, and expressed the willingness to reinforce bilateral and multilateral ties with the southern European country.

He also referred to such fields as tourism, banking, insurance, shipping, ship repairs, international law education, and marine education as the areas in which the two countries can have further cooperation.

Zarif also called on Malta, which will take the rotating presidency of the European Union next year, to pay a special attention to the implementation of Europe’s commitments as per the nuclear deal implemented by Tehran and world powers back in mid-January.

Vella, who arrived in Tehran on Saturday on an official visit, appreciated Iran’s hospitality and said for his part that Tehran has indicated that dialog and understanding can be very helpful.

“Your view of the future has shown that we can make big changes. Everyone is aware of the great influence Iran can have on world’s politics and economy,” he added.

He also referred to his meeting with Zarif, saying that the two sides explored the avenues for promoting mutual cooperation in different fields.