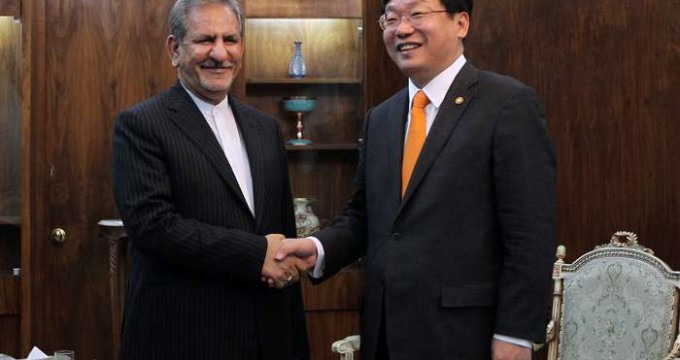 Jahangiri: No limitation for development of ties with Seoul

Tehran, Feb 29, IRNA – First Vice-President Es-haq Jahangiri said on Monday that there is no limitation for development of ties in different fields with South Korea.

He made the remarks in a meeting with South Korean Minister of Trade, Industry and Energy Joo Hwang-wan.
He said that Iran and South Korea have always good relations with Iran in different periods, but during the arbitrary sanctions, trade ties decreased and now lifting the sanctions led the two countries to make good on the sanctions.

Iran is a market with 80 million population and in addition it provides access to market of 400 million people on neighborhood, so South Korea may access such huge markets through direct investment and providing finances for joint venture projects in Iran.

Jahangiri said that visit of South Korean president to Iran, which is to be done in near future, would serve as a turning point in bilateral relations, so Tehran-Seoul Joint Economic Commission is required to make arrangements to draft the agreements to be signed and implement them seriously.

He said that Iranian government adopted nuclear program and is ready to develop nuclear cooperation with South Korea in the framework of JCPOA and regulations of Non-Proliferation Treaty to generate electricity and produce desalinated water.

The South Korean minister said the aim of his visit to Iran is to participate in Tehran-Seoul Joint Economic Commission as well as necessary planning for visit of South Korean president to Iran.

He said that South Korea has always been among confident customers of Iran’s oil, even during the sanctions era.
If the joint economic commission convenes, the two countries will do their utmost to open a new chapter for economic cooperation.