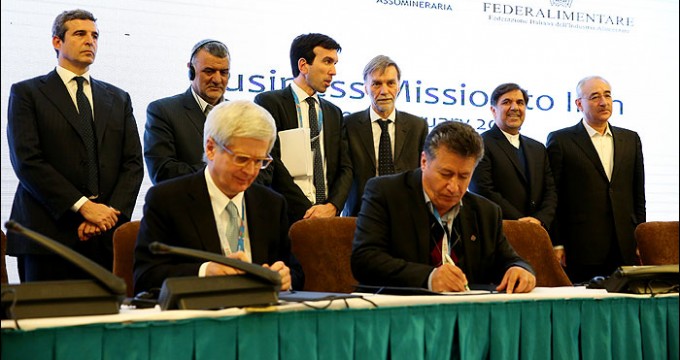 Iran has signed an agreement, including 5 billion euros in export credits from Italy, to expand and modernize its rail network.

The agreement, signed during a meeting of traders chaired by Italy’s Minister of Infrastructure and Transport Graziano Delrio and his Iranian counterpart Abbas Akhoundi in Tehran Tuesday, envisages developing high-speed rail links.

“The FS group will supply assistance to the Iranian railways for both high-speed and conventional rail lines, including a complete program for training personnel,” said a statement issued by the company in Rome.

The agreement was signed by Ferrovie Chief Executive Renato Mazzoncini and RAI Managing Director Mohsen Poursaeed-Aqaei during the third mission of Italian businesses to Tehran in recent months.

It came in the wake of Iranian President Hassan Rouhani’s visit to Italy last month, which marked the signing of a raft of deals worth $18 billion (15.9 billion).

Akhoundi said FS will carry out the planning and construction of a high-speed rail corridor linking the Iranian cities of Tehran, Qom and Isfahan.

The initial agreement also includes electrifying the rail link between Tehran and Tabriz and upgrading the road between Bandar Imam Khomeini in the Persian Gulf and the Bazargan border with Turkey, he said.

FS said it will be on the “frontline” for the planning and construction of high-speed rail links between the Iranian cities of Tehran and Hamadan, and between Arak and Qom.

Iran has already secured a soft loan from the Chinese to build a high-speed rail line between Tehran and Mashahd. Akhoundi said the country is considering a similar arrangement with the Italians.

“Iran lies on the crossroads of the East and the West and the Silk Road. This is not a random event. It is history which says Iran is the point of equilibrium in the region,” he said.

“The main objective in the rail transportation sector is to complete the entire network and shift some of the road transportation to rail, given the development of industries and mines in Iran,” Akhoundi said.

Minister of Industry, Mine and Trade Mohammad Reza Netmatzadeh has said Iran seeks to splurge up to $8 billion over the next six years to revamp and expand its railway network.

Iran is a vast country, with a territory more than 1.6 million square kilometers. It is bounded by the Caspian Sea in the north and the Persian Gulf in the south which are linked through the famous Trans-Iranian Railway.

The line is famous for being used by the Anglo-Soviet occupiers in 1940s to ship arms supplies during World War II.

Persia is known to have established the world’s most ancient transportation system. The Persian Royal Road in the 5th century BC stretched over 2,400 kilometers which spanned the entire territory under the Achaemenid empire.

“Today, we seek to revive Silk Road in a modern form in all the rail, air, road and sea sectors. Fortunately, there is a good ground in the country and we have held useful negotiations with the Italian side in this regard,” Akhoundi said on Tuesday.