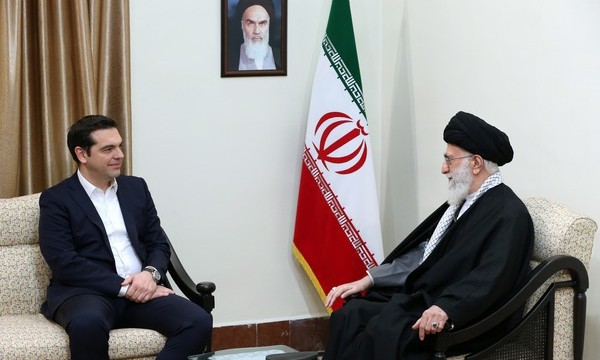 Tehran, Feb 8, IRNA – Terrorism is a contagious and very dangerous disease which can be contained if it is seriously encountered, but unfortunately some parties directly, or indirectly assist terrorist groups, said Supreme Leader of Islamic Revolution in a meeting with Greek prime minister.

Ayatollah Seyyed Ali Khameneie in a Monday evening meeting with Alexis Tsipras highlighted the fact that had it not been to the clandestine support for the terrorist forces in the Middle East by a handful of regional and trans-regional countries, the regional nations would have already uprooted terrorism in the Middle East.

The supreme leader meanwhile referred to the glorious record of Iran-Greece ancient cultures and civilizations, stating that the Greek prime minister’s ongoing visit can lead to boosting long term bilateral cooperation and interactions.

Focusing on Prime Minister Tsiprias’ comments about the existence of a variety of differing viewpoints and interests across Europe, he said that the right criticism against Europe today is that on the contrary of the past, today the EU does not pursue an independent will free from the US hegemony.
‘That is a weak point that the Europeans need to get rid of,’ said Ayatollah Khameneie.

The supreme leader meanwhile expressed hope that Greece will manage to pass through its lingering economic crisis successfully and emerge from it strong and prestigious.

In the meeting held in the presence of the Iranian First Vice President Es’haq Jahangiri the Greek Prime Minister Tsiprias praised Ayatollah Khameneie as ‘the leader of a great and highly prestigious nation that has played a decisive role in defense of their ideals and independence.’

The top Greek official said that his visit of Iran is the sign of Athens’ political will to boost comprehensive cooperation with Tehran.
‘This visit will mark a turning point in our bilateral relations to serve both nations’ interests,’ he added.

Tspirias said that although there are contradicting viewpoints and interests, complications and troubles in Europe, the economies of the European countries are so intermingled with one another that harbingering any change in them is very tough.

‘In order to reform that situation the combination of forces in the EU need to be thoroughly reshuffled,’ he added.