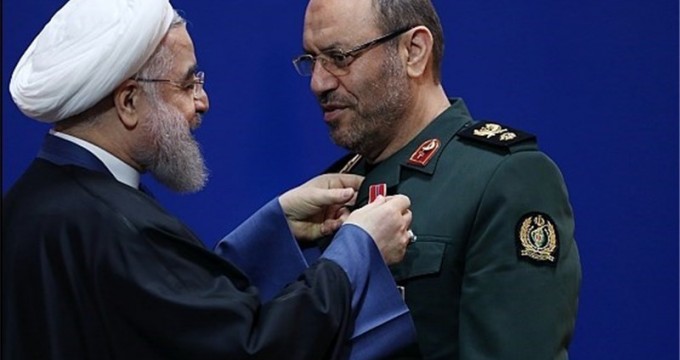 TEHRAN (Tasnim) – Iranian Defense Minister Brigadier General Hossein Dehqan said on Monday that the enhancement of the country’s defense power will not be stopped even for a moment.

The Iranian administration and president has not overlooked the improvement of the country’s defense power even for a moment, General Dehqan said, adding that it will never stop the enhancement of its defense capabilities.

“Iran’s missile power will always be a thorn in the eyes of enemies of the Revolution,” he added.

General Dehqan made the remarks after receiving the First-Class Order of Courage from the Iranian President Hassan Rouhani.

Rouhani on Monday awarded a number of the country’s highest government-bestowed honors to the foreign minister, defense minister and nuclear chief for their role and efforts in the achievement of a nuclear deal with world powers.

A ceremony was held in Tehran on Monday morning to commemorate the families of the Iranian nuclear scientists that have been martyred and the officials and staff who had a role in a long process of negotiations that led to the Joint Comprehensive Plan of Action (JCPOA), a lasting nuclear deal between Tehran and the Group 5+1 (Russia, China, the US, Britain, France and Germany).

The other members of the Iranian team of negotiators, engaged in the diplomatic, legal and technical fields, were also given the Second-Class Order of Merit, the Third-Class Order of Service, and Golden Signs for their efforts.

The president also gave awards to the families of the martyred nuclear scientists.

“What helped the team of nuclear negotiators to fulfill such duty was the Iranian nation’s vigilance and resistance, which paralyzed the weapon of sanctions and forced the world’s big powers to respect (Iran),” Zarif said after receiving his medal.

The JCPOA came into force on January 16, terminating all nuclear-related sanctions against Iran.