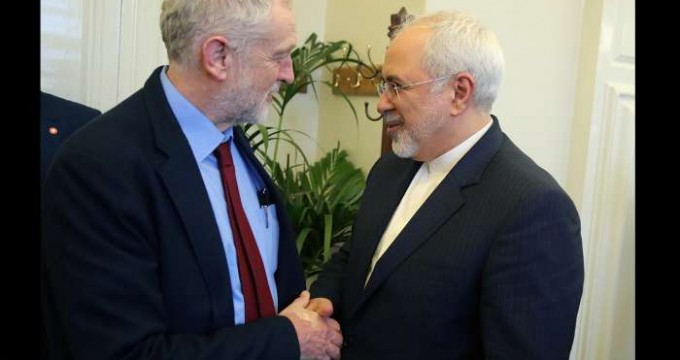 TEHRAN (Tasnim) – Iranian Foreign Minister Mohammad Javad Zarif held separate meetings with a number of British parliamentarians and officials including the Chancellor of the Exchequer George Osborne in the British capital.

During the meeting with Osborne held in London on Friday, Zarif pointed to the recent implementation of the nuclear deal between Tehran and world powers (known as JCPOA) and highlighted Iran’s fulfillment of its commitments.

He further urged the removal of certain barriers to the expansion of Iran-Britain cooperation in economic, banking, and financial fields.

Osborne, for his side, underlined the necessity for the settlement of problems. He also referred to the JCPOA implementation, stressing that Britain is totally loyal to its commitments based on the deal, and will use any required instrument in this regard.

During his stay in London, Zarif also held a meeting and conferred with British National Security Adviser Mark Lyall Grant on bilateral and regional issues.

He also met the British opposition leader and Leader of the Labor Party Jeremy Corbyn, and discussed with him Tehran-London ties as well as the promotion of parliamentary relations. Zarif, who is in London to attend a conference to raise money for Syrian refugees, earlier met with British Prime Minister David Cameron and his British counterpart Philip Hammond.

During the Thursday meeting between Zarif and Cameron, the two highlighted the progress in Tehran-London relations, and called for expansion of trade ties.

“The Prime Minister and Foreign Minister Zarif agreed that progress had been made on the bilateral relationship, and there was an opportunity to do more to boost trade links,” a British administration spokesman said.

Also after a Friday meeting between Zarif and Hammond, the two diplomats declared the visa sections of the two countries’ embassies will be reopened within the next weeks, probably in late February.

Hammond also explained about the delay in resumption of banking ties between Iran and Britain, saying that the problems are being resolved in cooperation with his German, French and Iranian counterparts.

Zarif’s trip to London was the first official visit by an Iranian foreign minister in more than a decade. Hammond described the visit in a post in his Twitter account as a “symbol of warming relations” between Tehran and London.

Iran-Britain ties soured in 2011. On November 27, 2011, a large majority of Iranian lawmakers voted to downgrade diplomatic ties with Britain, following Britain’s decision to impose sanctions on the Central Bank of Iran.

Following the incident, Britain withdrew its diplomatic staff from Tehran on November 30 and asked Iran’s diplomatic delegation in London to leave within 48 hours.

The two countries made diplomatic efforts afterwards to amend ties.

In August 2015, the British embassy in Iran reopened after a 4-year closure.

Britain’s Foreign Secretary Hammond attended a ceremony in Tehran to mark the reopening on August 23. It was the first visit by a British foreign secretary to Iran since 2003.