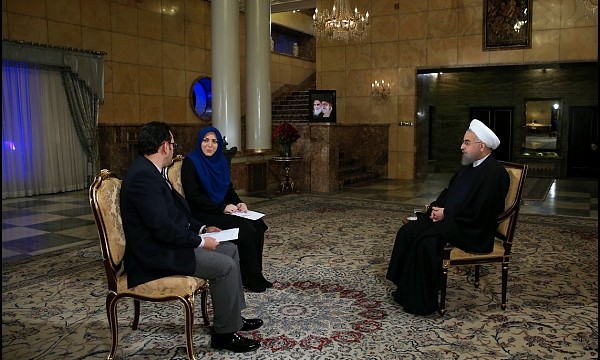 ‘Iran not after superpower status’

President Hassan Rouhani says Iran does not want to become a “domineering power” in the region but it would punish any country which tried to harm its national interests.

“If any country seeks to deal a blow to our national interests, we will respond. However, we hope it doesn’t get there,” he said in an interview with the Islamic Republic of Iran Broadcasting (IRIB) on Tuesday night.

“If needed, we will respond decisively to certain behaviors of some countries. If necessary, we will give a punishing response to the opposite side,” he added.

The president did not mention any country but tensions have escalated following Saudi Arabia’s severing of ties with Iran after Tehran’s strong condemnation of the kingdom’s execution of prominent Shia cleric Sheikh Nimr al-Nimr.

The rapid deterioration came after Iran and the West agreed to implement a nuclear agreement, with some observers believing that Saudi Arabia, fearful of Tehran’s rising influence, had jumped on the occasion to muddy the waters.

Rouhani said, “We hope regional countries would consider interests of the region. We are not looking to become a domineering power in the region.”

“We are looking to a region which is proud and powerful. We would like all regional countries, especially our neighbors and the regional Muslims, to live together in peace and work toward development and prosperity.”

Rouhani said Iran does not seek tensions with its neighbors.

“However, some neighboring countries have behaved very badly and shown immaturity in their behavior, which does not comply with brotherhood and being a Muslim; neither with the history of ties between two countries,” he said.

Rouhani said, “Iran is a forgiving nation and if these countries own up to their mistakes someday and abandon creating tensions in the region and make up for their mistakes, it will forgive them.”

The president also made a reference to Syria, saying Iran is ready to help in any possible way establish ceasefire and peace in the country.

“Our aim is to help the regional countries get rid of their problems in the face of terrorists. We regard combating terrorists as one the prerequisites of stability in the region,” Rouhani said.

“Unfortunately, certain countries, whether knowingly or unknowingly, are helping terrorism. We want territorial integrity of all the regional countries to be protected and no disintegration to take place.”

Rouhani said Iran is also ready to mediate between Russia and Turkey and help them resolve their diplomatic tensions.

“We have good relations both with Russia and Turkey. Both are good neighbors for us and tensions between them are very dangerous,” he said.

“We will employ all our efforts to de-escalate tensions because tensions will neither benefit those countries nor the region,” Rouhani said.

“Certain countries, however, are unfortunately trying to stoke tensions among others with the illusion that tensions would benefit them. But tensions will not benefit any country in the region,” he added.