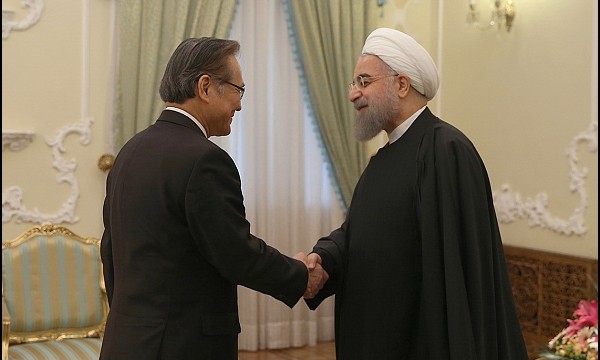 TEHRAN (Tasnim) – Iranian President Hassan Rouhani voiced the country’s willingness to strengthen relations with Thailand in all fields as a comprehensive nuclear deal between Iran and six world powers has terminated all nuclear-related sanctions against Tehran.

“Today, the conditions are highly suitable for the enhancement of interaction between Tehran and Bangkok with the termination of (anti-Iran) sanctions,” President Rouhani said in a meeting with Thailand’s Foreign Minister Don Pramudwinai in Tehran on Sunday.

The president stressed that bilateral cooperation should not be confined to trade, saying Iran is willing to forge close relations with Thailand in the cultural, academic and tourism sectors as well.

He also called for the expansion of collective cooperation among members of the Association of Southeast Asian Nations (ASEAN) and the Economic Cooperation Organization (ECO) with the purpose of promoting regional development, noting that the developing nations should provide each other with their experience in different spheres.

The visiting Thai minister, for his part, predicted that Iran will turn into an “economic power” in the near future considering its efforts to train skilled manpower during the sanctions era.

Don Pramudwinai also referred to visits to Iran by multiple Thai delegations as a sign of the Southeast Asian country’s resolve to bolster its ties with Tehran.

The Thai diplomat is heading a delegation of 50 businessmen and officials from different companies seeking to identify business opportunities in Iran.

The visit comes a week after the Joint Comprehensive Plan of Action (JCPOA), a lasting nuclear deal between Iran and the Group 5+1 (Russia, China, the US, Britain, France and Germany), came into force.

Based on the nuclear deal, reached in July 2015, all nuclear-related anti-Iran sanctions have been removed.